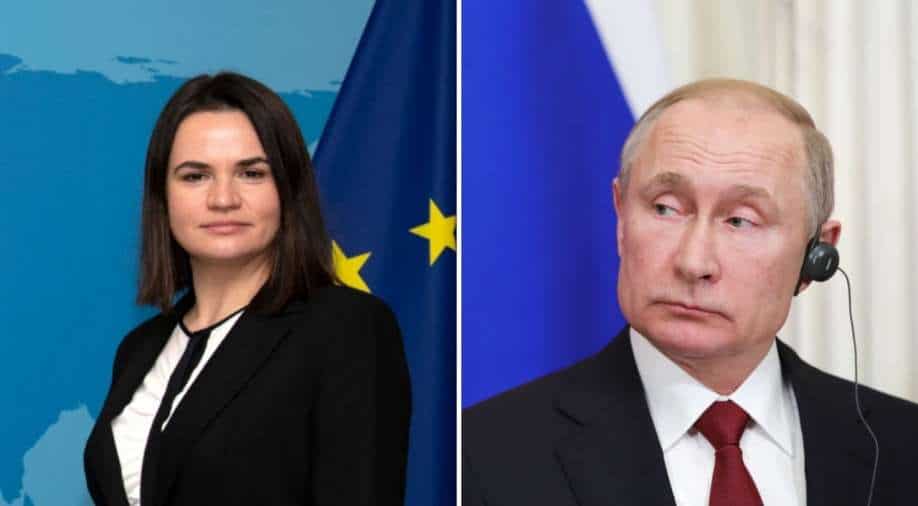 In an exclusive interview to WION, Belarus opposition leader Sviatlana Tsikhanouskaya said it should not be a negotiation between the regimes of US, Russia and Belarus, but between the Belarus regime and the civil society

Belarus opposition leader Sviatlana Tsikhanouskaya has said that while she supports mediation from Russia for a peaceful transition of power in the eastern European country, the “future of Belarus would be only decided by its people”.

“I would like to underline that it is not up to Russia or other countries to decide the future of Belarus. It is only up to the people of Belarus. We are not in contact with Kremlin. We haven’t had any communication with them, but we sent our message through media, through different leaders that if Russia wants to play a constructive role in our country, then they have to stop supporting Lukashenko and his regime,” Tsikhanouskaya told WION from Vilnius, the capital of Lithuania, where she is living in exile.

Belarus has been on edge ever since August last year when a controversial presidential vote showed Lukashenko winning his sixth straight election. Thousands of people have been on the streets demanding that their autocratic leader step down.

Lukashenko has been the President of Belarus since 1994 and is known as “Europe’s last dictator.” It was alleged that he sought the help of Putin to solidify his leadership in the eastern European country.

Following Lukashenko’s disputed victory, a crackdown ensued, forcing Tikhanovskaya to flee the country, while others were jailed.

“We are sure that peaceful transition of power can be only through negotiations. We live in the 21st century, we are civilised people and everything should be solved peacefully. We welcome every side that can be a mediator in this negotiation. But it should not be a negotiation between the regimes of US, Russia and Belarus, but between the Belarus regime and the civil society, along with representatives of the other countries who can sit at the round table and be mediators. As a mediator, Russia, US, UK, India, whoever, if they can help us with this crisis, we welcome everyone,” she said.

Tsikhanouskaya said that Russia has also been keeping its distance from Belarus President Lukashenko as he has become a liability to the Kremlin government.

“Lukashenko is becoming expensive economically and politically for Kremlin. But the question is they don’t have another person to change Lukashenko at the moment. And now they are prolonging Lukashenko’s time by supporting him,” she said.

“They (Russia) understand that Lukashenko’s political career is over,” she added.

Speaking on the US’ support for the democratic movement in Belarus, Tsikhanouskaya said she didn’t see any political will from the Biden government to resolve the issue.

“The Belarus Democracy Act was adopted rather fast in the US, but it has not been implemented fully. There is no political will for its implementation,” she said.

The Belarus Democracy Act of 2004 is a United States federal law that authorizes assistance for political parties, non-governmental organizations, and independent media working to advance democracy and human rights in Belarus.