Ex-Trump lawyer Cohen to be sentenced for hush money payments 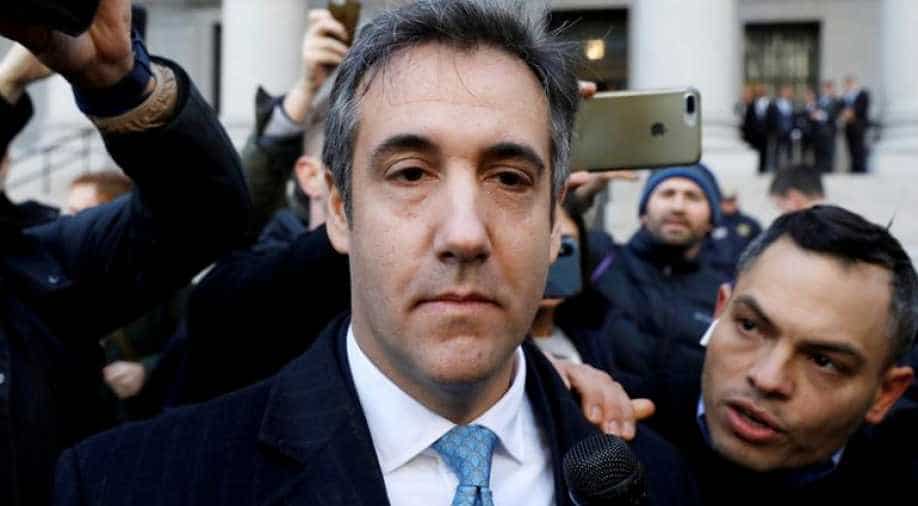 Cohen, 52, pleaded guilty in August to charges by federal prosecutors in New York that, just before the election, he paid adult film actress Stormy Daniels $130,000 and helped arrange a $150,000 payment to former Playboy model Karen McDougal so the women would keep quiet about their relationships with Trump, who is married. Trump denies having the affairs.

US President Donald Trump's former personal lawyer Michael Cohen will be sentenced on Wednesday for his role in the payment of hush money to women who said they had affairs with Trump and for lying to Congress about a proposed Trump Tower project in Russia that was discussed during the 2016 election campaign.

Cohen, 52, pleaded guilty in August to charges by federal prosecutors in New York that, just before the election, he paid adult film actress Stormy Daniels $130,000 and helped arrange a $150,000 payment to former Playboy model Karen McDougal so the women would keep quiet about their relationships with Trump, who is married. Trump denies having the affairs.

Cohen also admitted to unrelated tax and bank fraud. He faces sentencing on a separate charge of lying to Congress brought by Special Counsel Robert Mueller, who is investigating possible coordination between Trump's campaign and Russia. Cohen pleaded guilty to that charge last month.

The sentencing by US District Judge William Pauley in Manhattan will cap the stunning about-face of a lawyer who once said he would "take a bullet" for Trump but has now directly implicated the president in criminal conduct.

Trump has denied any collusion with Russia and has accused Mueller's team of pressuring his former aides to lie about him, his campaign and his business dealings. Russia has denied US allegations of interfering in the election to help Trump.

Prosecutors and Cohen both say the hush money payments violated campaign finance laws and were directed by Trump himself to cover up affairs he had in 2006 and 2007. Federal law requires that the contribution of "anything of value" to a campaign must be disclosed, and an individual donation cannot exceed $2,700.

In an interview with Reuters on Tuesday, Trump denied the payments were campaign contributions. "If it were, it’s only civil, and even if it’s only civil, there was no violation based on what we did," he said.

Trump's lawyer Rudy Giuliani has argued the payments cannot be considered campaign finance violations because they were made to protect Trump's reputation and would have been made even if he had not been a presidential candidate.

Though Cohen asked in a November 30 court filing to be given no prison time based on his assistance in the investigation, prosecutors on Friday asked that Cohen be given a "substantial term of imprisonment" for his crimes with only a "modest" reduction to the roughly four- to five-year term they say he faces under sentencing guidelines.

Though they said he provided useful information about the hush money payments, prosecutors said Cohen declined to sign a formal cooperation agreement, which would have required him to be fully debriefed about his entire criminal history and his knowledge of others' crimes. His refusal to cooperate fully, they said, limited his credibility as a witness.

In his guilty plea to Mueller's charge, Cohen admitted he lied to Congress about the timeline for discussions about plans for real estate businessman Trump's skyscraper in Moscow. He said in written testimony to two committees that the talks ended in January 2016, before the first Republican primaries, when they actually continued until June 2016 after Trump clinched the Republican nomination.

Mueller's sentencing recommendation was more generous, saying Cohen had provided valuable information about contacts between Trump's campaign and Russia. He recommended any sentence for lying to Congress be served concurrently with Cohen's sentence on the charges in New York.

Sentencing consultant Justin Paperny said Judge Pauley has a reputation for being tough on white-collar defendants and that Cohen probably made a mistake by asking for no jail time when he failed to fully cooperate.

"It’s like he wanted to have his cake and eat it too," said Paperny, adding that Cohen would do well to get a sentence in the low end of the guidelines.