'Everyone in Germany will be vaccinated, cured or dead': Europe battles virus surge as Austria enters lockdown 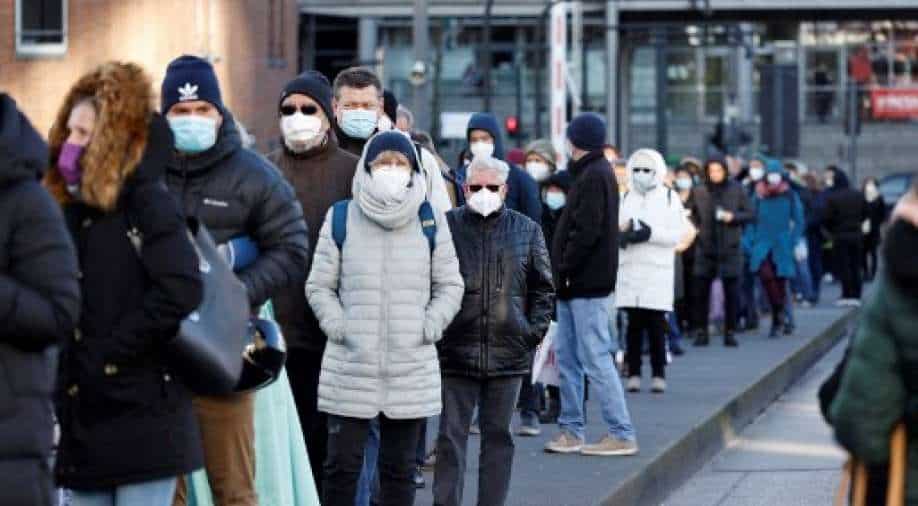 People wait in queue to get vaccinated in Hamburg, Germany Photograph:( AFP )

German Chancellor Angela Merkel said the current coronavirus curbs are 'not enough' as the country battles the fourth wave.

Amid a wave of protests over coronavirus restrictions, UK Prime Minister Boris Johnson said there is no "move from plan A to plan B, or any other plan" as the country continues to grapple with the virus.

Johnson urged people to get the booster dose although the UK prime minister cautioned that he was concerned over the coronavirus situation even as Austria entered into a lockdown on Monday.

The UK had recorded over 40,000 coronavirus cases on Saturday and 150 deaths over a period of 28 days.

Amid a surge in COVID-19 cases, German Chancellor Angela Merkel said the current curbs are "not enough" as the country battles the fourth wave.

Also Read: 'Very worried': WHO warns of 500,000 deaths by March amid new wave in Europe

Reports claim coronavirus cases have been surging among the elderly in Germany even as nearly 68 per cent of the population have received both jabs. The country reported over 30,000 new coronavirus cases on Monday and 62 fatalities.

The German parliament has voted to introduce stricter coronavirus restrictions with proof of vaccination for citizens being the key.

Health minister Jens Spahn while stating the vaccine situation said: "Probably by the end of this winter, as is sometimes cynically said, pretty much everyone in Germany will be vaccinated, cured or dead."

Meanwhile, in Vienna shops remained closed as Austria imposed the lockdown. Slovakia imposed restrictions on its unvaccinated population as Europe prepares to battle the virus during the winter.

Reports claim Slovakia has one of the lowest vaccination rates in Europe with just over 45 per cent of the population fully vaccinated.

As governments across Europe continued to clamp down, Netherland and Belgium were hit by waves of anti-lockdown protests which turned violent.

Dutch Prime Minister Mark Rutte hit out against the protests describing it as "pure violence" by "idiots". At least 130 people were arrested in the country after protests erupted in Rotterdam leading to clashes between demonstrators and police.