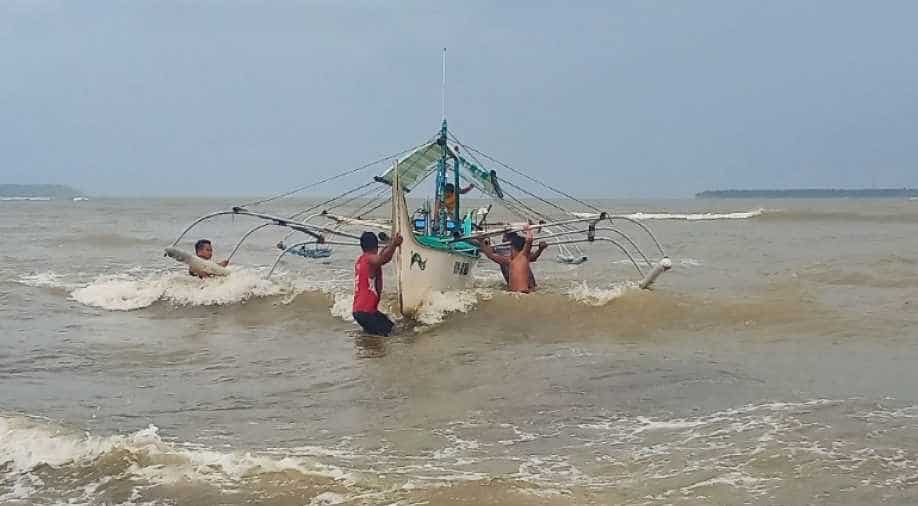 Kammuri was expected to make landfall late Monday or early Tuesday and then pass to the south of the capital, which is home to some 13 million people and is hosting thousands of athletes for the regional Southeast Asian Games.

Typhoon Kammuri barrelled towards the Philippines on Monday, pushing tens of thousands of people into evacuation centres and prompting authorities to order a temporary closure of Manila's international airport as a safety precaution.

Kammuri was expected to make landfall late Monday or early Tuesday and then pass to the south of the capital, which is home to some 13 million people and is hosting thousands of athletes for the regional Southeast Asian Games.

Airport officials said they made the call based on the potency of the storm, which was forecast to come ashore with intense rains and sustained winds of up to 165 kilometres (100 miles) per hour as well as gusts of up to 230 kilometres per hour, forecasters said.

"Based on our estimate, it will be closed from 11 am (0300 GMT) to 11 pm tomorrow, December 3," said Ed Monreal, general manager of Manila's airport authority.

Nearly 70,000 people had already fled their homes in the Bicol region, disaster officials said, which is where the typhoon is expected to strike first.

However, some residents opted to stay put even as the storm's power began to hit.

"The wind is howling. Roofs are being torn off and I saw one roof flying," local Gladys Castillo Vidal told AFP.

"We decided to stay because our house is a two-storey made of concrete... Hopefully it can withstand the storm."

The weather bureau also warned of rain-induced landslides and possible storm surges of up to three metres (10 feet) which could hit coastal areas in the nation's east.

The country's deadliest cyclone on record was Super Typhoon Haiyan, which left more than 7,300 people dead or missing in 2013.

Kammuri already snarled some plans for the SEA Games, which opened Saturday for thousands of athletes from the region and is set to run through to December 11 in and around Manila.

Windsurfing was halted as a precaution and triathlon events were held earlier than scheduled.

Ramon Suzara, the chief operating officer of the organising committee, said contingency plans were in place for bad weather, but the duration of the Games would not be extended.

"Everything is set," Suzara told reporters. "For contingency, all venues, all competition managers, technical delegates are ready."

The storm is the latest trouble for the Games, which saw a series of transport hiccups and a rush of last-minute construction ahead of the opening.

This year's Games in Clark, Manila and Subic are already particularly complex, with a record 56 sports across dozens of venues that are in some cases hours apart by car.

Around 8,750 athletes and team officials are expected at this year's 30th edition -- the biggest ever -- along with another 12,000 volunteers. Organisers hope more than 500 million viewers will tune in on TV by the end of the competition on December 11.

The Philippines have made a strong start to the Games, rising to the top of the medal table with over 70 in total, ahead of Vietnam in second place and Malaysia in third.