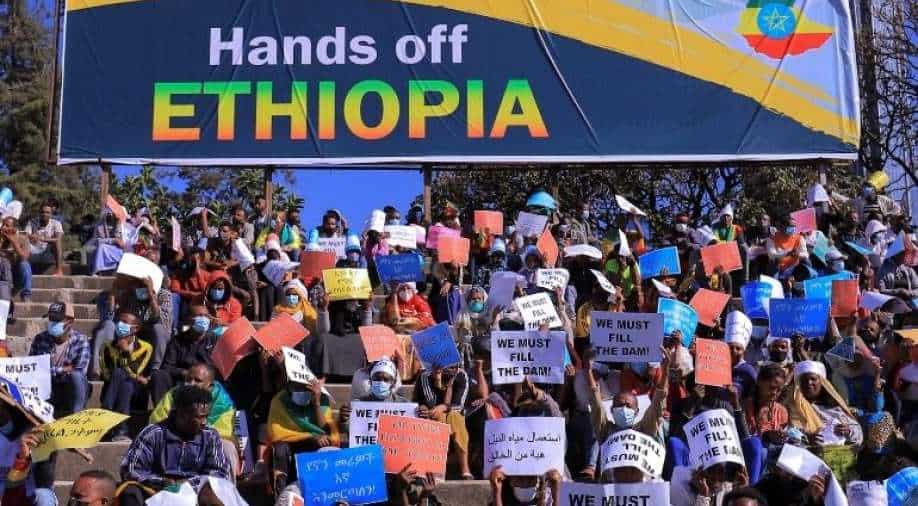 Ethiopian pro-government demonstrators attend a rally to protest against the US action over alleged human rights abuses during the conflict in the Tigray region, in Addis Ababa, Ethiopia May 30, 2021. Photograph:(Reuters)
Follow Us

The demonstration was larger than typical pro-government rallies, and the public criticism of the United States was rare

Ethiopian pro-government demonstrators denounced the United States on Sunday for imposing restrictions on aid over the Tigray conflict, at a massive rally organised by the authorities to show support for their positions.

More than 10,000 people attended the rally, some carrying banners written in English, Arabic and Amharic. Slogans included: "USA show us your neutrality", "Ethiopia doesn't need a caretaker", and "Fill the dam", a reference to a huge Nile dam opposed by Egypt and Sudan.

The demonstration was larger than typical pro-government rallies, and the public criticism of the United States was rare.

Ethiopia is facing increasing international pressure over the conflict in Tigray, where it and neighbouring Eritrea sent troops last year to oust the regional authorities.

A week ago, the United States imposed restrictions on economic and security assistance to Ethiopia over the conflict. Washington also said it would bar current or former Ethiopian or Eritrean officials it deems responsible for the crisis.

The filling of the $4 billion Grand Ethiopian Renaissance Dam has also sparked international disputes. Ethiopia says the dam's electricity is needed to develop its economy; Sudan and Egypt say it violates their rights to the Nile waters down river.

"We will never kneel down. The preconditions and travel restrictions by the US and its allies are completely unacceptable. It needs to be corrected," Adanech Abebe, mayor of Addis Ababa, told the rally organised by the Ministry of Youth.

Nejash Sheba, a 23-year old Addis Ababa trader and member of Prime Minister Abiy Ahmed's Prosperity Party, told Reuters he had been told by local officials to organise people in his area, and had brought 100 others with him to the rally.

"I came here to show my support to Prosperity Party and to denounce the restrictions put on Ethiopia by America."