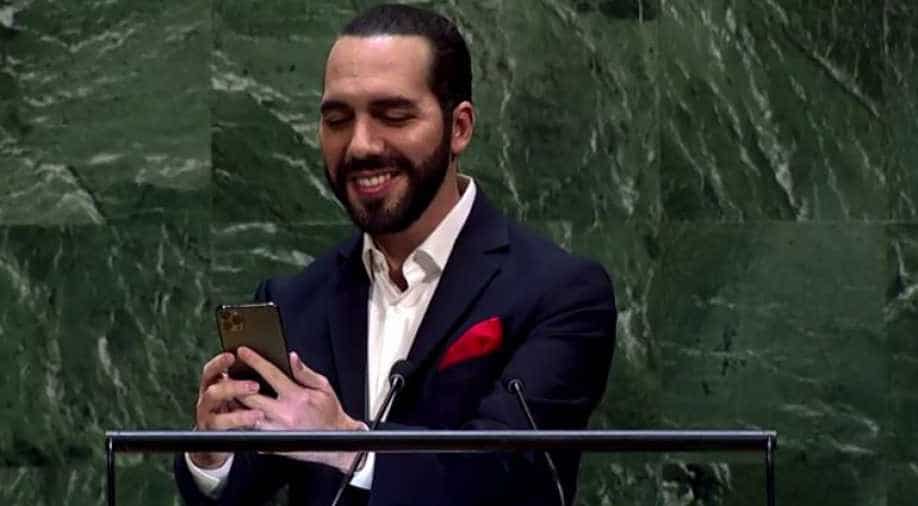 He also defended an agreement allowing the United States to send back asylum seekers who cross the Central American country while journeying north.

El Salvador's President Nayib Bukele on Thursday said that the United States should promote legal migration as part of its crackdown on illegal immigration, calling on President Donald Trump to continue a programme shielding some migrants from deportation.

He also defended an agreement allowing the United States to send back asylum seekers who cross the Central American country while journeying north, arguing it was part of his effort to combat irregular migration.

"If the U.S. government is serious about fighting irregular migration, it should support and encourage legal migration," he told reporters after giving a speech to the United Nations General Assembly, where the 38-year-old leader took a selfie on the podium.

He said the poor, violence-stricken country would be capable of taking in hundreds of thousands of Salvadorans who could be sent back if Trump ends the Temporary Protected Status (TPS) programme, noting that most migrants with TPS had the means to support themselves and that El Salvador was their "home."

But Bukele said Trump should maintain the policy, arguing that most Salvadoran migrants with TPS were law-abiding and successful and wanted to remain with their families in the United States.

"The majority of people with TPS have means; that is not the struggle. The struggle is that if they were deported, it would break up families," he said.

TPS was granted to El Salvador following two devastating 2001 earthquakes that left hundreds of thousands of people homeless. The programme offers protection from deportation to immigrants who already are in the United States, including those who entered illegally, from countries affected by natural disasters, civil conflicts and other problems.

He pushed back on criticism that the policy turns El Salvador into an enforcer of the Trump administration's immigration policy, and also rejected suggestions it would lead to a massive influx of migrants.

"We have not put up any wall," Bukele said. "What we have done is support our largest natural ally."

Under the agreement - which will take effect only after details are hammered out - the United States will in exchange help El Salvador expand its tiny asylum system.