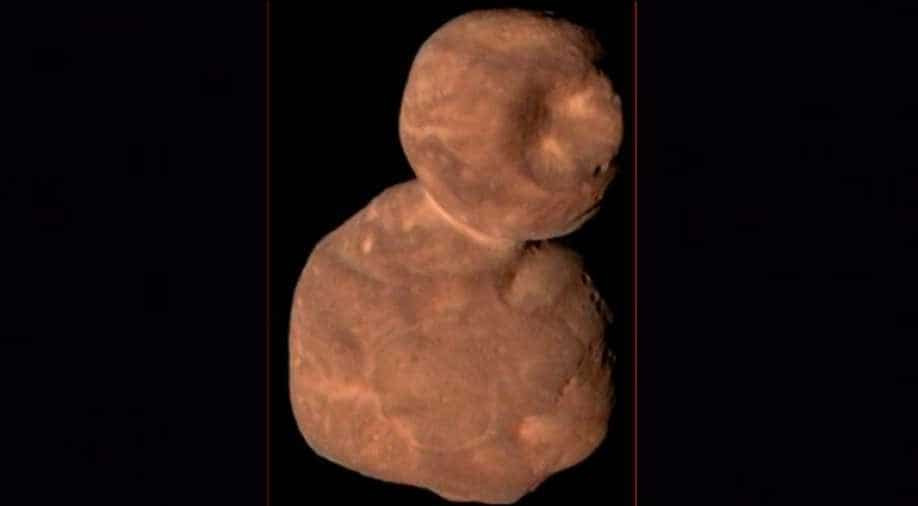 The uniform color and composition of Arrokoth’s surface shows the Kuiper Belt object formed from a small, uniform, cloud of material in the solar nebula, rather than a mishmash of matter from more separated parts of the nebula. The former supports the idea that Arrokoth formed in a local collapse of a cloud in the solar nebula. (Source: NASA) Photograph:( Others )

Also Read: Need some space? NASA has got the job for you

NASA said a spacecraft flew past the Kuiper Belt object Arrokoth in January last year which showed "icy remnants of solar system formation in the vast region beyond the orbit of Neptune."

“Arrokoth is the most distant, most primitive and most pristine object ever explored by spacecraft, so we knew it would have a unique story to tell,” NASA's Alan Stern said, adding," It’s teaching us how planetesimals formed, and we believe the result marks a significant advance in understanding overall planetesimal and planet formation.”

Remarkably, NASA showed a doughnut-shaped image as Arrokoth had two connected lobes, a smooth surface and a uniform composition, indicating it was likely pristine.

“This is truly an exciting find for what is already a very successful and history-making mission,” said Lori Glaze, director of NASA's Planetary Science Division.

After New Horizons spacecraft took the pictures, NASA scientists brought out a picture to show Arrokoth would have formed.

“Just as fossils tell us how species evolved on Earth, planetesimals tell us how planets formed in space,” said William McKinnon, a New Horizons co-investigator, adding,"Arrokoth looks the way it does not because it formed through violent collisions, but in more of an intricate dance, in which its component objects slowly orbited each other before coming together."

"The uniform colour and composition of Arrokoth’s surface shows the KBO formed from nearby material, as local cloud collapse models predict, rather than a mishmash of matter from more separated parts of the nebula," the space agency said.

NASA said the Arrokoth's smooth surface indicated it was well preserved since the end of the planet formation era. The agency informed that New Horizons continues to carry out more observations of additional Kuiper Belt objects and is now 7.1 billion kilometres from Earth and speeding deeper into the Kuiper Belt at nearly 50,400 kilometres per hour.