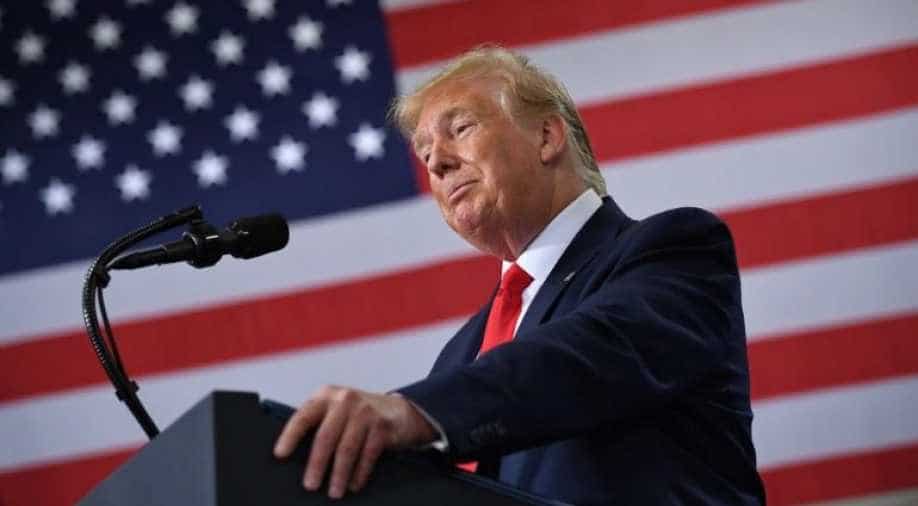 The negotiations are the first face-to-face talks since Trump agreed to a truce with Chinese President Xi Jinping at June's G20 summit.

US President Donald Trump ripped into China on Tuesday after US negotiators arrived in Shanghai to resurrect talks aimed at ending a year-long trade war between the world's two top economies.

Trump took to Twitter to slam China hours after top US officials landed in the financial hub for the first face-to-face discussions since the US leader agreed to a trade war truce with Chinese President Xi Jinping in June.

"My team is negotiating with them now, but they always change the deal in the end to their benefit," Trump tweeted.

..My team is negotiating with them now, but they always change the deal in the end to their benefit. They should probably wait out our Election to see if we get one of the Democrat stiffs like Sleepy Joe. Then they could make a GREAT deal, like in past 30 years, and continue

Trump had accused China of reneging on its commitments before previous talks broke down in May.

This time the US leader said Beijing was supposed to start buying US agricultural products but they have shown "no signs that they are doing so".

"That is the problem with China, they just don't come through," he said.

China is doing very badly, worst year in 27 - was supposed to start buying our agricultural product now - no signs that they are doing so. That is the problem with China, they just don’t come through. Our Economy has become MUCH larger than the Chinese Economy is last 3 years....

Washington and Beijing have so far hit each other with punitive tariffs covering more than $360 billion in two-way trade, in a tense stand-off centred on demands for China to curb the alleged theft of American technology and provide a level playing field to US companies.

US Trade Representative Robert Lighthizer and Treasury Secretary Steven Mnuchin did not talk to reporters after arriving in the Chinese financial hub on Tuesday.

A motorcade believed to be carrying the US officials later headed to the city's famous Peace hotel, where they were expected to meet Chinese officials for dinner.

The US officials are due to hold formal talks with Vice Premier Liu He on Wednesday.

Trump's Twitter tirade will reinforce already low expectations that this week's negotiations will lead to a major breakthrough.

Trump said last week he believed Beijing was hoping to delay a deal until after the US presidential election in November 2020, and on Tuesday the Republican said China could wait to see if a Democratic opponent wins the vote and "continue to ripoff the USA".

"The problem with them waiting, however, is that if & when I win, the deal that they get will be much tougher than what we are negotiating now...or no deal at all," he said.

"We have all the cards, our past leaders never got it!"

Days before the Shanghai meeting, Trump threatened to pull recognition of China's developing nation status at the World Trade Organization -- prompting an irritable reply from Beijing about the "arrogance and selfishness" of the US.

The US leader has also angered the Chinese side by claiming the slowing economy is forcing them to make a trade deal, and blacklisting telecom giant Huawei over national security concerns.

In a commentary on Tuesday, state news agency Xinhua admitted relations were "strained" and called for the US to "treat China with due respect if it wants a trade deal".

Holding talks in Shanghai instead of Beijing was seen as a nod to a time of better relations, as the city was the home of the 1972 Shanghai Communique -- an important step in building diplomatic relations between the US and China.

Chinese Commerce Minister Zhong Shan, who is seen as a tough negotiator, is expected to join Liu on the Chinese side.

But both sides were busy lowering expectations in the run-up to talks.

Mnuchin told CNBC last week there were still "a lot of issues" while Chinese state-run daily The Global Times wrote that it is "widely believed that trade talks will take a long time".

There was no sign of the rhetoric letting up either, with the China Daily newspaper's Tuesday editorial saying "the US should give its go-to tactic of maximum pressure a couple of days off as it has proven ineffective against China".

It pointed to an announcement at the weekend that China would buy more US agricultural products including pork, cotton and soybean as a sign of China's "goodwill" -- and called for the US to "reciprocate if it wants any progress to be made".