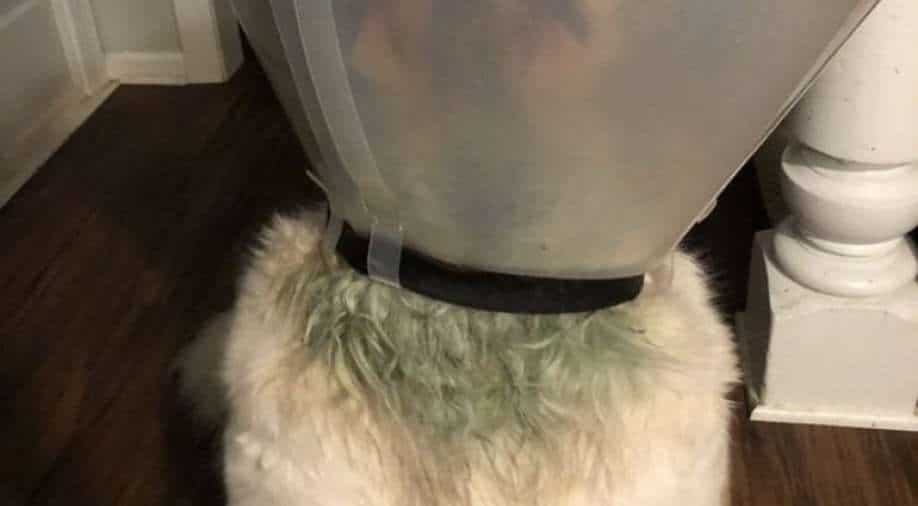 When Olson woke up in the morning, she observed a strange green colour in the neck area of her dog. Alarmed by this, the Earth geochemist used her knowledge to figure out the reason behind this change of colou

All dog and cat parents have has to impose the 'cone of shame' punishment on their furry children at least once. While it looks funny, the cone, also known as the 'Elizabethan collar' is highly irritating for animals.

Several studies have reported that the collar makes pets feel miserable, but veterinarians feel it helps in healing wounds in cases of dogs and cats.

However, Twitter was alarmed when an astrobiologist reported that the fur coat of the dog, near its neck, had turned green overnight after the dog slept wearing the cone.

Also read | China reports first 'Monkey B Virus' death. How does it spread? What are its symptoms?

Stephanie Olson, an astrobiologist and professor at Purdue University Department of Earth, Atmospheric, and Planetary Sciences took to Twitter to share her experience of making her dog wear the Elizabethan collar.

When Olson woke up in the morning, she observed a strange green colour in the neck area of her dog. Alarmed by this, the Earth geochemist used her knowledge to figure out the reason behind this change of colour.

She observed that her dog, Olive, drools a lot and usually that saliva drips on the floor. However, since Olive was wearing a cone, the saliva funnelled down from the cone to her neck.

"Dog saliva contains iron porphyrins. Upon contact with oxygen, the iron is oxidized to iron oxide nanoparticles. Rust, essentially. This is why Olive and many other drooly dogs have rusty red staining by their mouths," Olson explained.

Further, Olive slept with the cone in a posture that limited oxygen for her neck area. While the furry kid was asleep, the bacteria consumed all of the oxygen from the neck area that "prevented the red staining typically associated with dog saliva. Instead, green rust formed!," Olson detailed. "And the staining along her neck transitioned from rusty red on her chin to rusty green thanks to the combination of her unusually moist neck environment and sustained isolation from oxygen in the air—both symptoms of the cone."

While the green colour is not harming the dog, which the experts know of, Olson is worried if the colour will come off any time soon.

Some people shared similar experiences in the comments.