China reports first 'Monkey B Virus' death. How does it spread? What are its symptoms? 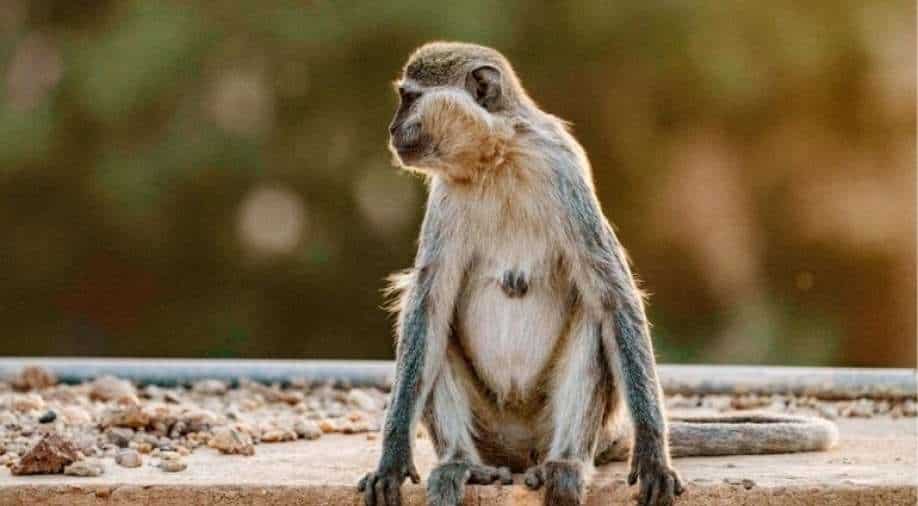 A monkey that lives freely on the campus of the University of Khartoum in the Sudanese capital, is pictured on March 9, 2021. Photograph:( AFP )

China on Saturday reported the first human infection and death caused by "Monkey B Virus". According to the journal "China CDC Weekly", a veterinary surgeon caught the virus after dissecting two dead monkeys in March.

The "Monkey B Virus" is found among macaque monkeys. It is largely present in the saliva, feces, urine, brain or the spinal cord tissue of the monkeys. The virus can survive on surfaces for hours, especially in moist conditions.

The risk of transmission for the general population remains extremely low. But laboratory workers, veterinarians and others involved in animal care specifically involving monkeys are at high risk.

The veterinarian who died was 53 and started showing virus-like symptoms including nausea and vomiting a month after coming in contact. Another month later, the person began experiencing fever and neurological symptoms.

According to details made public in China CDC Weekly, the veterinarian succumbed to the virus on May 27.

Symptoms of Monkey B Virus

Just like COVID-19, the "Monkey B Virus" exhibits flu-like symptoms like fever, muscle ache, chills, fatigue, headache. After catching the virus, the person may develop blisters on the wound. Other serious symptoms include shortness of breath, nausea, vomiting, abdominal pain, and hiccups.

When the disease advances, a person may experience adverse reactions like swelling of the brain and spinal cord. This results in neurological disturbances and causes inflammation, which in turn triggers muscle coordination issues and potential brain damage.

How does Monkey B Virus spread?

Monkey B Virus was initially isolated in 1932 after being spotted in macaques. According to China CDC Weekly, the virus is usually transmitted through direct contact and exchange of bodily fluids.

In case the virus jumps from monkeys to humans, the fatality rate is between 70-80%.

The US National Library of Medicine claims that B Virus can attack the central nervous system if transmitted to humans. According to CDC, a person with Monkey B Virus shows symptoms between one day and three weeks after the first contact.

The only way to treat the virus is through timely antiviral intervention. Otherwise, there is no vaccine available to fight the virus. The United States Centers for Disease Controls and Prevention (CDC) claims that the Monkey B Virus has infected only 50 people since 1932. Out of these, 21 died. The agency claims it's an extremely rare disease.