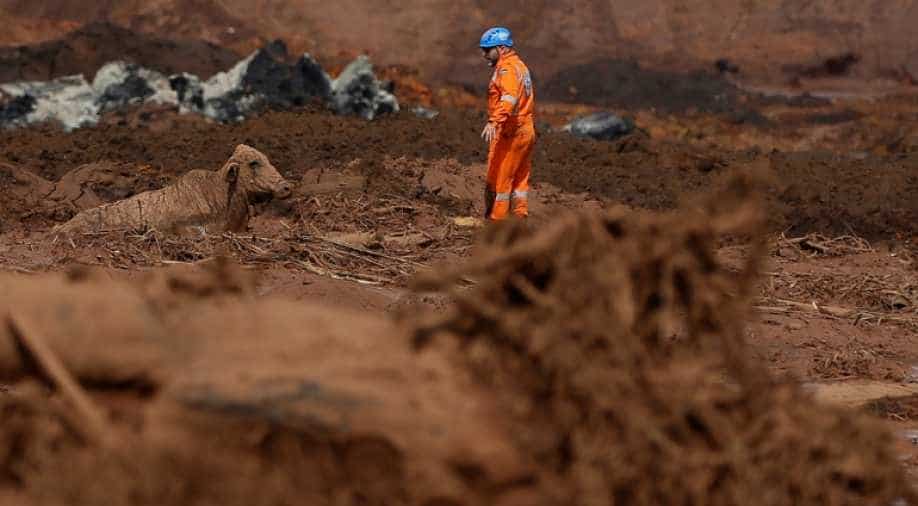 Daily tests carried out by Brazil's national water agency ANA in the Paraopeba tributary, muddied along 200 kilometres by the dam burst, show the presence of metals in the water has spiked to unhealthy levels.

Nearly a week after a dam storing mining waste collapsed in southeast Brazil, the human cost is clear, with nearly 350 killed or missing, but the environmental impact is still being evaluated.

Authorities fear the mineral-laced slurry released by the collapse could eventually pollute the Sao Francisco River, the second-longest in Brazil, which hosts various species of fish and has many towns on its banks.

Daily tests carried out by Brazil's national water agency ANA in the Paraopeba tributary, muddied along 200 kilometres by the dam burst, show the presence of metals in the water has spiked to unhealthy levels.

Residents along the riverbanks have already said fish they relied on for food were floating to the surface, dead.

"Most of us here are very rural, riverside people, so we use the Paraopeba River to feed ourselves. It gives us fish, we use it to water our plants, and now we can't do this anymore, so many people have been affected by the dam breaking," one local, Leda de Oliveira, 31, told AFP.

It added that, while trace levels of lead and mercury had initially spiked, they had since fallen to normal counts. Arsenic — another impurity often found in iron ore waste — was not a problem, according to the tests.

But those measured just water quality, and not the way the elements were being absorbed in sediment, food chains and the general ecosystem.

Experts say the real long-term effects of the dam break at the mine, located near the town of Brumadinho and owned by Brazilian mining giant Vale, may not be evident for years.

"Right now there are many unknowns — how toxic is the waste? How mobile are the toxins? Will the waste move again? It is only when these things are known that we will really know how bad this will be," an expert in landslides, Professor David Petley at Britain's University of Sheffield, told AFP.

Immediate action, "very expensive if done properly," was needed to contain the pollution, he said, adding: "There is a lot of waste in the river. There is a risk that this now moves downstream in floods, or that toxins that it releases might move."

While Brumadinho is now considered Brazil's worst-ever industrial accident, given its high likely final death toll, a similar mining dam collapse three years earlier in the same region, near the town of Mariana, remains the country's worst environmental disaster. Its effects are still being measured today.

The dam near Mariana was part of a facility jointly owned by Vale. Nineteen people were killed. Pollution extended for  650 kilometres (400 miles) along a river, to the Atlantic Ocean.

The 60 million tons of waste it released was more than four times greater than the 13 million tons held back by the Brumadinho dam. Whole ecosystems affected by the Mariana sludge were killed off.

Both disasters resulted from ruptures of tailings dams — reservoirs of detritus left over from the process of extracting iron ore. Such dams are the cheapest ways to store mining waste, but also the riskiest, as the two successive disasters showed.

Petley said it was to be hoped that measures to contain pollution were better now but added that both disasters were "scandalous failures."

Vale started decommissioning its tailings dams in Brazil after the 2015 Mariana disaster and has now accelerated the process for its remaining 10 dams.

But for Brumadinho, where many inhabitants worked at Vale, that process proved tragically slow.

Almost all of the dead and missing were workers at the mine, many buried by the sludge as they were having lunch in the facility's on-site cafeteria.

Many residents accuse the mining giant of putting profits over lives. Graffiti saying "Vale, murderer" has been scrawled on several walls in Brumadinho, and in mud at Vale's headquarters in Rio de Janeiro.

"We are all shaken. This should never have happened. There was a lot of recklessness. Today all of Brumadinho is in mourning," said Gustavo Franca, a 25-year-old real estate agent who lost many friends.

Vale paid dearly for Mariana. It and its partner in the joint venture, Anglo-Australian miner BHP, forked out $6 billion in compensation and fines. But, while 20 executives were charged, none ever went to trial and to date, no one was convicted.

Authorities have frozen $3 billion of Vale's assets to pay for damages from the latest disaster. Lawsuits are bound to follow.

It has also already lost around 20 per cent of its value on the stock market this week.