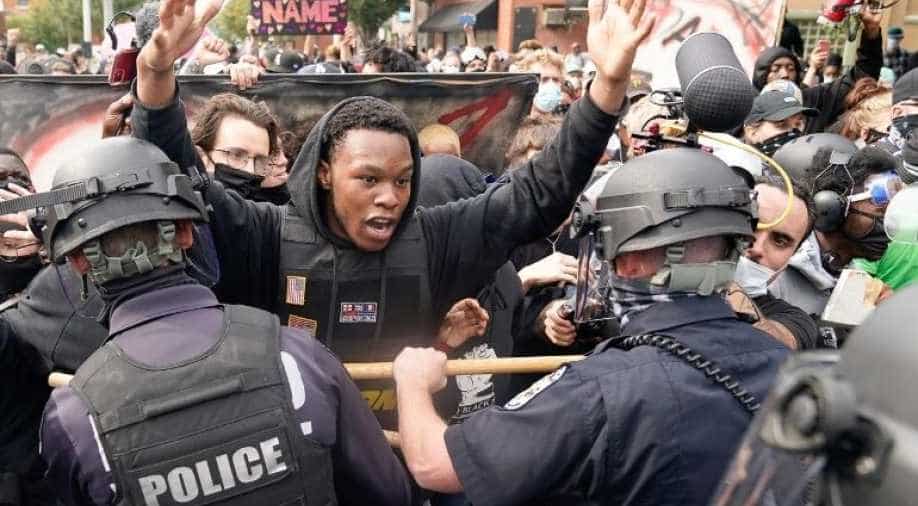 A protester clashes with police after a grand jury considering the March killing of Breonna Taylor, a Black medical worker, in her home in Louisville, Kentucky Photograph:( Reuters )

After the grand jury decided to not charge anyone in connection with the police killing of Taylor, a black woman, on Wednesday, there were protests in Louisville and other cities across the country

Curfew continued for another night in Louisville city, US on Thursday as protests spiralled following the court decision that no one would face charges for the killing of Breonna Taylor.

After the grand jury decided to not charge anyone in connection with the police killing of Taylor, a black woman, on Wednesday, there were protests in Louisville and other cities across the country.

Over a thousand protesters gathered in Louisville's downtown on Thursday evening to continue night-long protests, with many taking refuge on a church premise after the curfew began.

"No way we can be peaceful any longer," Michael Pyles, a black man told news agency AFP, saying he has been demonstrating against racism for 120 days, and possessed a 9mm handgun.

"We're out here to protect our people and the people who support us," the 29-year-old said.

"We are under attack."

Grace Pennix, a 19-year-old African American, spoke about how she fears a similar fate as faced by Taylor.

"I often be passing by my front door and thinking, dang, the police could be coming at my door and shoot me and kill me just like they did with Breonna," she said.

Thousands of protesters hit the streets of Louisville, the city where Taylor resided, demanding justice for her and demonstrating peacefully in the beginning.

However, these protests turned violent as the demonstrators clashed with police.

On Wednesday, two cops were also shot in the protests.