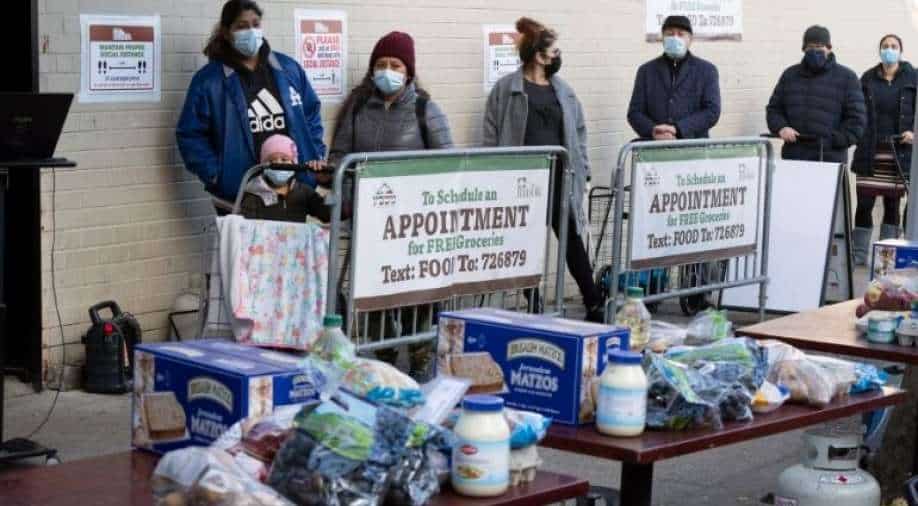 People wait in line at a food pantry in Queens on Dec. 28, 2020. The early weeks of the Biden administration have brought a surge of support, in the White House and across party lines in Congress, for what could be the most ambitious effort in a generation to reduce child poverty. (James Estrin © 2021 The New York Times) Photograph:( The New York Times )

The plans vary in duration, design and the amount they would add to the federal debt, but they share a new, central premise in the policy debate over how to help the poor

The early weeks of the Biden administration have brought a surge of support, in the White House and across party lines in Congress, for what could be the most ambitious effort in a generation to reduce child poverty.

The plans vary in duration, design and the amount they would add to the federal debt, but they share a new, central premise in the policy debate over how to help the poor: that sending monthly payments through tax credits to parents, even if they do not earn income from work, is the best way to help feed, clothe and house children from low-income families.

One such plan is a cornerstone of the legislative text that House Democrats introduced Monday as part of what will become a sweeping bill to implement President Joe Biden’s proposed $1.9 trillion economic aid package. That text included a monthly benefit of $300 per child for those age 5 and younger — and $250 per child ages 6 to 17 — as a means of making good on Biden’s pledge to increase the value of the child tax credit and help more families, even those with little or no income, reap its benefits.

While that payout would expire after a year, several Democrats and one influential Republican are pushing to permanently increase child benefits, which researchers say could lift the United States into the ranks of wealthy nations like Canada and the United Kingdom, both of which enjoy significantly lower child poverty rates.

The proposal released Monday came at the start of a week of committee hearings that will determine the final details of the Democratic plan to combat the economic and health toll from the coronavirus.

The Democrats called for sending $1,400 direct checks to individuals earning up to $75,000 a year and couples earning up to $150,000, the same threshold as previous rounds of payments. The size of the checks would shrink more rapidly for higher earners than in previous rounds, and no household earning more than $200,000 would be eligible for payments of any size.

The draft legislation also includes a provision, championed by progressive Democrats, that would increase the federal minimum wage to $15 an hour by 2025. The Congressional Budget Office estimated Monday that such an increase would cut the poverty rate by nearly 1%, but reduce employment by 1.4 million jobs. That potential job loss, which the budget office has previously predicted, was immediately cited by conservatives who oppose the provision.

The full draft legislation, which largely mirrors Biden’s proposals and the president is expected to support, also includes billions of dollars to support schools and colleges, small businesses, and renters and homeowners. It expands benefits for the unemployed, dedicates $25 billion in aid to struggling restaurants and provides a financial rescue for certain private-sector pension plans that cover 1 million workers and retirees.

The congressional Joint Committee on Taxation estimated Monday that Biden’s temporary expansion of the child tax credit would cost $110 billion and that the direct payments to individuals would cost $422 billion. The committee has not yet prepared a cost estimate of the full legislative proposal.

To help hold down the overall cost, Democrats reduced an extension of unemployment benefits from six months to five, a change that Sen. Ron Wyden, D-Ore., chairman of the Finance Committee, vowed to reverse in the Senate.

Democrats hope to have the entire package signed into law by mid-March to avoid yet another lapse in crucial unemployment benefits. U.S. stocks moved further into record territory Monday in a sign of investor optimism that Congress would soon pass another large spending package.

Optimism has also grown among lawmakers, who have long pushed for aggressive federal action to reduce child poverty, sensing a window from the crisis and an opportunity to work across the aisle.

“The escalation of hardship and uncertainty during the pandemic has renewed the focus on making sure that low-income families with children, in particular, have the resources they need to put food on the table for their children,” said Zachary Parolin, an assistant professor at Bocconi University in Italy and a senior researcher at the Center on Poverty and Social Policy at Columbia University.

Three in 20 Americans under the age of 18 lived below the poverty line at the end of last year, according to the center. The share rises to more than 1 in 5 for Black and Hispanic children, which is more than double the rate for white children. And while Congress has passed several tax credits in recent decades — including a child tax credit created by the 2017 Republican tax overhaul — to help the poor, many do not reach children whose parents are out of work, which includes wide swaths of the Black and Hispanic children living in poverty.

“This was already a policy that was structured in such a way to prevent children who need it the most from getting it,” said Sophie Collyer, the research director at the Columbia poverty center.

Sen. Mitt Romney, R-Utah, proposed last week to create monthly payments up to $350 per child, even larger than the temporary ones in Biden’s proposal. They would be sent from the Social Security Administration to families from the very poor to near the top of the income spectrum.

To avoid adding to the deficit, Romney’s plan would eliminate or streamline other safety net programs and eliminate the deduction for state and local taxes, which largely benefits high earners in high-tax states like New Jersey and New York. The moderate Niskanen Center estimates the net effect of the plan would be to cut the child poverty rate by a third.

Congressional Democrats in both chambers, even before they vote to approve Biden’s temporary rescue plan, are already working to write a large expansion of child benefits permanently into the tax code.

“We build the architecture for the future,” said Rep. Rosa DeLauro of Connecticut, the chairwoman of the House Appropriations Committee, who introduced legislation with Reps. Suzan DelBene of Washington and Ritchie Torres of New York on Monday that would establish a permanent expansion of the child tax credit and make it fully refundable. “That has been underlying so that we’re not just throwing money at a situation, but we are looking at enduring, transformational change.”

Anti-poverty groups and a growing group in Congress have pushed for years to send more federal aid to parents. But they have run into long-standing concerns over “disincentives to work,” which conservative groups have lodged against their proposals. Those groups say that sending money not conditioned on earning income outside the home would make it easier for low-income parents to quit their jobs and rely solely on government support.

“At the very least, policies shouldn’t create disincentives to work, produce long-term economic consequences, nor enable dependency on the benefit,” said Veronique de Rugy, an economist at the libertarian Mercatus Center at George Mason University. Romney’s plan, she said, “would do that by transporting us to a pre-1996-welfare-reform world where the benefit is available no matter the marital or employment status of the parents.”

Biden campaigned on an expansion of child benefits to combat poverty. He and his cabinet have repeatedly invoked the plight of children in stressing the need for his economic aid package.

“We have 24 million adults and 12 million children that are going hungry every day,” Janet L. Yellen, the Treasury secretary, told CNN on Sunday. “And we need to provide them with food. We have people suffering, particularly low-wage workers and minorities, and through absolutely no fault of their own. We have to get them to the other side and make sure this doesn’t take a permanent toll on their lives.”

Democrats are poised to maneuver Biden’s rescue plan through a complex budget process to bypass the need for Republican votes in the Senate. As a result, any provision changing the child benefits will have to adhere to a series of parliamentary parameters. It is unclear if a permanent expansion of the benefit would prevail under the strict rules, as well as adhering to the overall price tag of the package outlined in a resolution that passed both chambers this month.

Such efforts could play out in the debate later this year over Biden’s next big economic proposal, which is expected to spend trillions on infrastructure, clean energy, education, health care and other liberal priorities, offset by tax increases on high earners and corporations.

Sen. Cory Booker, D-N.J., has been mounting his own push for a permanent expansion, including making a case with Yellen when she joined a recent Democratic caucus call and discussing the issue privately with a number of his colleagues, including Sen. Bernie Sanders, the Vermont independent in charge of the Senate Budget Committee, according to two people familiar with the conversations.

Booker, along with Rep. Ayanna S. Pressley, D-Mass., has also pushed Democratic leaders to move on a so-called baby bonds proposal, which would create a federally funded savings account for each U.S. child.