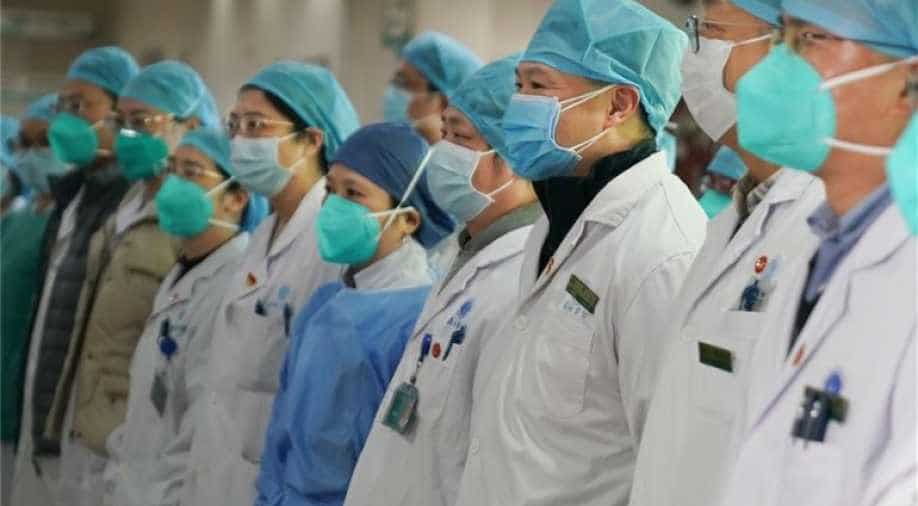 The medical staff of Union Hospital affiliated to Tongji Medical College of Huazhong University of Science and Technology attended a ceremony to form an "assault team" in the fight against pneumonia caused by the novel coronavirus in Wuhan. Photograph:(IANS)
Follow Us

China has banned wild animal trade until the situation is taken under control.This comes as reports suggest that virus was spread from the illegal market which traded live animals.

Chinese health authorities announced Monday that 24 new fatalities have brought the death toll from the coronavirus outbreak to 80 and more than 2,744 have been infected so far.

National Health Commission has said on Sunday that 461 people are in critical conditions.

Making the situation even graver, Wuhan's mayor has said that thousand more cases of coronavirus are expected. 769 new cases have now been reported.

No new deaths were confirmed outside of Hubei province.

Meanwhile World Health Organization director-general Tedros Adhanom announced that he was headed to China to assist with response efforts to the coronavirus.

China has banned wild animal trade until the situation is taken under control.This comes as reports suggest that virus was spread from the illegal market which traded live animals.

There have also been claims that snakes are the source of this coronavirus.

According to the joint directive, raising, transporting or selling all wild animal species is forbidden "from the date of the announcement until the national epidemic situation is over."

China’s health minister, however, has said that people can spread it before they have symptoms.

China's national health commission earlier said that the transmission ability of the coronavirus is getting stronger and that the number of infections could continue to rise.

In a press briefing, authorities have said that knowledge of the new virus is limited.

Tianjin -- a city of about 15 million--has now become the second major city to suspend long-distance buses that enter and leave the city.

This comes a day after Beijing announced a similar measure. Shandong province has also banned long-distance buses over fears of an outbreak.

Public attractions such as Beijing's forbidden city, shanghai Disneyland and a section of the great wall have been closed as a precaution.

Hubei province in central China is the epicentre of this outbreak. 14 cities in Hubei, including Wuhan, have been completely locked down.

In Hubei, 18 cities have been put under travel restrictions that include closing public transport links and access to highways.

They have also ordered nation-wide detection measures on flights, buses and trains. Hong Kong has confirmed the 8th case of coronavirus. Hong Kong hospital authority has said that there are 77 suspected cases of the virus.

Hong Kong has declared the outbreak an 'emergency'. This is the highest-level health warning in the semi-autonomous region.

All schools have been closed till February 17. While all the flights and trains to Wuhan remain suspended indefinitely.

Hong Kong Disneyland and ocean park, two of the city's biggest theme parks, have closed due to the coronavirus outbreak.

While chief executive Carrie lam has urged the public to be rational and fight the outbreak together.

Protesters in hong kong set alight a facility housing the quarantined patients. The fire was later put out by firefighters and the damage appeared to be confined to the lobby area.

Hundreds of riot police also moved in, arresting at least one person. A study has revealed that each infected person is passing the disease on to between two and three other people on average at current transmission rates.

The spread of this disease depends on the effectiveness of control measures. To be able to contain the epidemic and turn the tide of infections, control measures would have to halt transmission in at least 60% of cases.