China wants to turn us into next Hong Kong: Taiwan to US official on visit 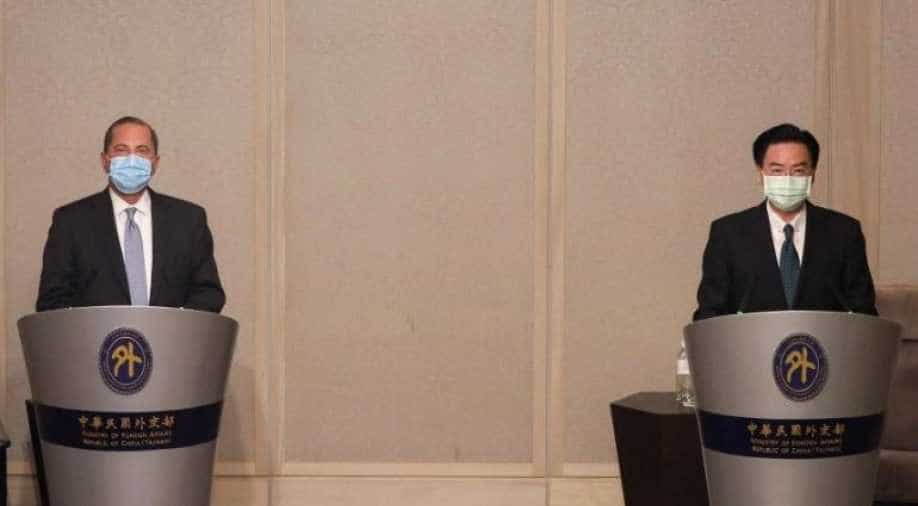 On August 10, Chinese jets briefly entered the median line of the Taiwan Strait

Taiwan on August 11 told visiting United States Health Secretary Alex Azar that China is pressurising the island to give in to conditions which would create a situation similar to Hong Kong.

On August 10, Chinese jets briefly entered the median line of the Taiwan Strait.

United States Secretary of Health and Human Services, Alex Azar’s diplomatic visit to Taiwan, which began on August 9 was a “true honour” for the Donald Trump administration.

The visit is largely being seen as a token of support to Taiwan, which has for long been sidelined diplomatically with countries favouring recognition of China instead, which in turn claims Taiwan as its own territory, a claim refuted by Taiwanese officials.

Azar met Tsai in the Taiwanese presidential office and claimed to have been in the island country to understand and learn from Taiwan’s success in dealing with the coronavirus pandemic, and the health model which compliments it. Azar had arrived in Taiwan on Sunday in what marked the highest-level US to visit to the country in four decades. The trip drew ire from China, which claimed that this visit was “endangering peace”.

Azar's trip to Taiwan has also coincided with a crackdown in Hong Kong, where police arrested media tycoon Jimmy Lai under a tough new national security law on Monday.

China has proposed a "one country, two systems" kind of arrangement with Taiwan, similar to how the country rules Hong Kong. It has been rejected by all Taiwanese parties.

In 1979, the US had severed ties with Taiwan to favour China. In the backdrop of the ongoing trade spat escalated by the pandemic, Trump has prioritised support for the country, while also boosting arms sales.

China has promised to issue sanctions for this visit. China believes Taiwan to be its own province, and believes force may be used if needed to bring the territory under their control.

Azar had arrived in Taipei on a US government aircraft on Sunday afternoon, where he was greeted by Brent Christensen, the de facto US ambassador to Taiwan, with Taiwan Deputy Foreign Minister Tien Chung-kwang in attendance.

All of US delegates were tested for COVID-19 before arriving, and have to mandatorily wear face masks and ensure social distancing.

Taiwan has been praised for its containment of COVID-19. Only 480 infections, mostly from outside the country were recorded in the country, and only seven people succumbed to the virus.

Azar claims that he is in the country to improve economic and healthcare cooperation, and to highlight Taiwan’s role in fighting the pandemic.