China slams US virus 'accusations' as Shanghai lockdown drags on 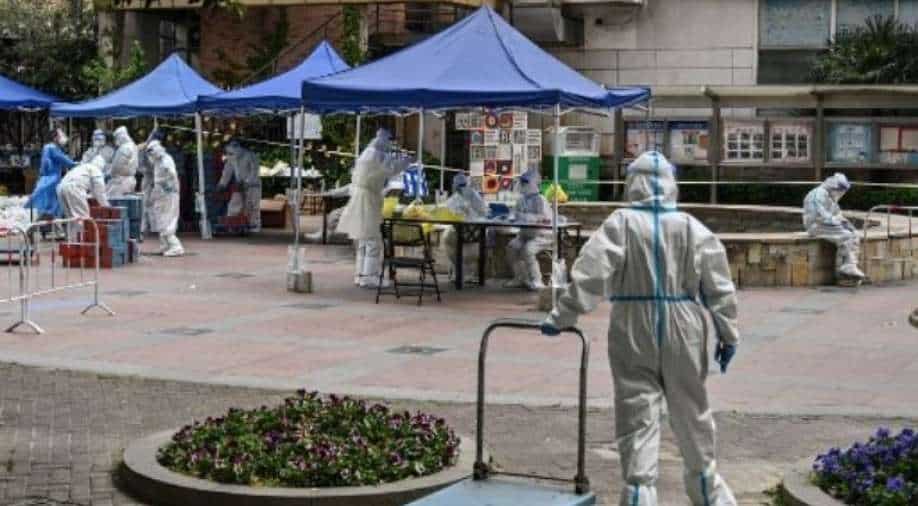 Health workers wearing personal protective equipment (PPE) are seen while waiting for residents for a test for the Covid-19 coronavirus in a compound during a Covid-19 lockdown in the Jing'an district in Shanghai. Photograph:( AFP )

The US embassy said Saturday it would permit non-essential employees to leave its consulate in Shanghai due to the case surge, warning citizens in China they may face "arbitrary enforcement" of virus curbs

China blasted the United States for making "groundless accusations" about its Covid-19 policy, after surging cases in Shanghai prompted the American consulate to let some staff leave the locked-down megacity.

Beijing's zero-Covid strategy has come under strain since March as over 100,000 cases in Shanghai have seen its 25 million inhabitants locked down in phases, inciting complaints of food shortages and clashes with health workers.

The US embassy said Saturday it would permit non-essential employees to leave its consulate in Shanghai due to the case surge, warning citizens in China they may face "arbitrary enforcement" of virus curbs.

In response, Beijing expressed "strong dissatisfaction and firm opposition to the US side's groundless accusations about China's epidemic control policy", according to a statement issued Saturday on the foreign ministry's website.

"This is the US's own decision. However, it must be pointed out that China's epidemic control policy is scientific and effective," ministry spokesman Zhao Lijian said, adding that Beijing had lodged "solemn representations" with American counterparts.

"We have full confidence that Shanghai and other places will overcome this round of the epidemic."

China is sticking fast to a policy of snap lockdowns, mass testing and travel restrictions to staunch the spread of the virus even as Shanghai's daily case numbers have spiralled under an Omicron-fuelled wave.

The business hub reported a record 24,943 new infections on Sunday -- mostly asymptomatic, accounting for over 90 percent of the national total.

Authorities have readied tens of thousands of new beds in over 100 makeshift hospitals as part of a policy of isolating every person who tests positive for the virus -- whether or not they show any symptoms.

Locals have begun to chafe at lockdown restrictions with many taking to social media to vent anger at food shortages and heavy-handed controls -- including the recent killing of a pet corgi by a health worker.

An unpopular policy of separating infected children from their virus-free parents -- now softened -- also triggered a rare show of public anger this week.

But officials are not budging on their zero-tolerance approach.

City health official Wu Qianyu said during a Sunday press conference the city "would not relax in the slightest".

Major online delivery platforms said they would bolster food stocks and draft in thousands of drivers to strengthen the supply of basic goods.

In an interview with a local news outlet on Saturday, Zhang Wenhong -- a top doctor in Shanghai's pandemic fight -- acknowledged the impact on the healthcare system but said "realising dynamic zero ... will help to resume normal medical order as early as possible".