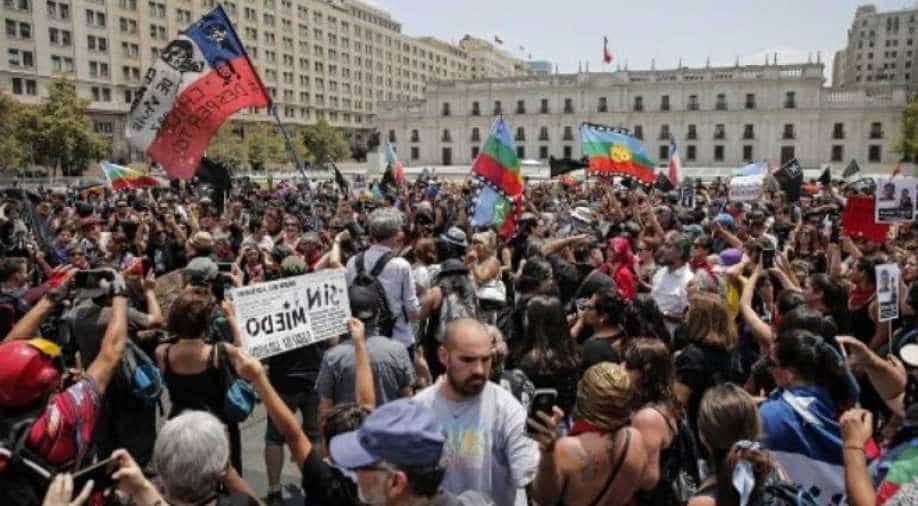 More than 1,000 people, many wearing black, marched in silence from Plaza Italia, ground zero of all the protests, along Alameda Avenue, the main thoroughfare in Chile's capital.

Hundreds of Chileans rallied Saturday night to protest what they call police repression during three months of the worst social unrest since democracy replaced the country's military dictatorship in 1990.

More than 1,000 people, many wearing black, marched in silence from Plaza Italia, ground zero of all the protests, along Alameda Avenue, the main thoroughfare in Chile's capital.

Keeping quiet was their way of denouncing the security forces' use of tear gas, water cannon and birdshot, although the latter was barred in November because it was causing many injuries.

"We are marching because of the human rights violations we have suffered. We will be here as long as is needed. This is the new Chile," said a social worker who gave her name only as Ana Maria.

Watch: Chilean protests turn violent as protesters show no sign of backing down

The unrest broke out over a metro fare rise but quickly grew into a broader outcry against economic and social inequality in what had been considered among the most stable countries in Latin America.

Watch: Violence at an all-time high in Chile

A total of 29 have died in violence related to the protests and nearly 3,700 were injured and more than 400 with eye injuries from the birdshot fired by police, according to the National Human Rights Institute.

The protesters on Saturday night got close to the La Moneda presidential palace. They sang and shouted slogans against conservative President Sebastian Pinera, whose approval rating has dropped to single digits since the protests began in November.