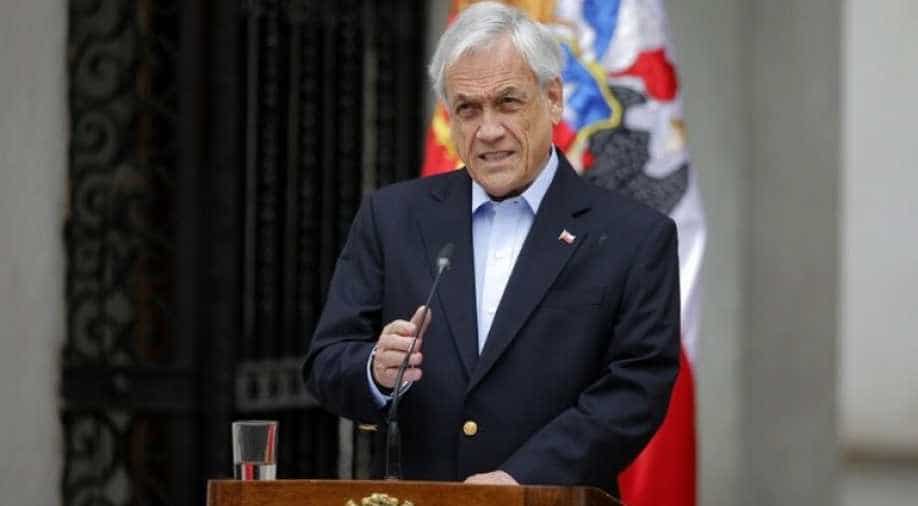 Pinera's claims were met with fury from both his political opponents and members of his own governing coalition, Chile Vamos.

Chilean President Sebastian Pinera, whose government has been rocked by riots over inequality, ignited a fresh wave of anger after claiming that "many" videos on social media of police abuse of demonstrators were "fake news," and unrest was being fomented by foreign governments.

Pinera told CNN Chile in an interview that there had been a "gigantic" disinformation campaign with videos circulating on Facebook, Instagram and Twitter that had been "filmed outside of Chile or misrepresented."

"There has doubtless been some participation by foreign governments and institutions," he said.

Pinera's comments were first screened by CNN on December 15, but only gained widespread renown on Thursday when they became the subject of intense debate.

On Friday, after Santiago residents were called to a "K-Pop rally" in the city's central Plaza Italia, thousands of people gathered to bang pots and pans and chant anti-government slogans, with a massive deployment of police who moved in to disperse them with water cannons and tear gas.

Pinera has been blamed by the political opposition, human rights organizations and activist groups for failing to act more quickly on widespread claims of rights abuses by security forces policing the protests since they began over inequality on October 18. With more than 26 people killed during the unrest and thousands more injured and arrested, Pinera's approval ratings have tumbled to as low as 10 per cent.

The claims of foreign interference are not new: the US State Department said it had seen indications of Russian “influence” on the unrest, “skewing it through the use and abuse of social media, trolling.”

However, Pinera's claims were met with fury from both his political opponents and members of his own governing coalition, Chile Vamos.

Sergio Micco, the head of Chile's Human Rights Institute which has reviewed online content as part of an investigation into police handling of the protests, told a local radio station that while the group had seen misleading material, the "immense majority" was authentic.

And Jorge Abbott, Chile's attorney general, said: "At the moment, the images we have analyzed don't fall in that category (of coming from abroad)."

On Thursday night, the president tweeted that he had not expressed himself "clearly enough" and said human rights abuses "should always be condemned."

Last week, the government gave prosecutors a report it said had been sent to its intelligence agency by an undisclosed source that analyzed 5 million social media accounts tweeting at the peak of the unrest.

The report, the government confirmed, highlighted that one in five tweets about the unrest was generated outside of Chile, and among the most active accounts were fans of Korea's K-pop culture.

Friday's call for a "K-Pop rally" in Santiago included the ambitious promise of a closing concert by South Korean megaband BTS.

During the evening, as protesters gathered, the nearby Alameda Art Center, whose lobby has been used as a triage center by volunteer medics during the protests, was set alight and almost totally destroyed, Santiago firefighters said.

There were widespread claims on social media that the fire was started by a police tear gas canister, though firefighters said they could not confirm the cause of the blaze and police did not respond to a Reuters request for comment.

Firefighters were also called to the San Sebastian University in the nearby Bellavista district, which was significantly vandalized and set alight during the protest.