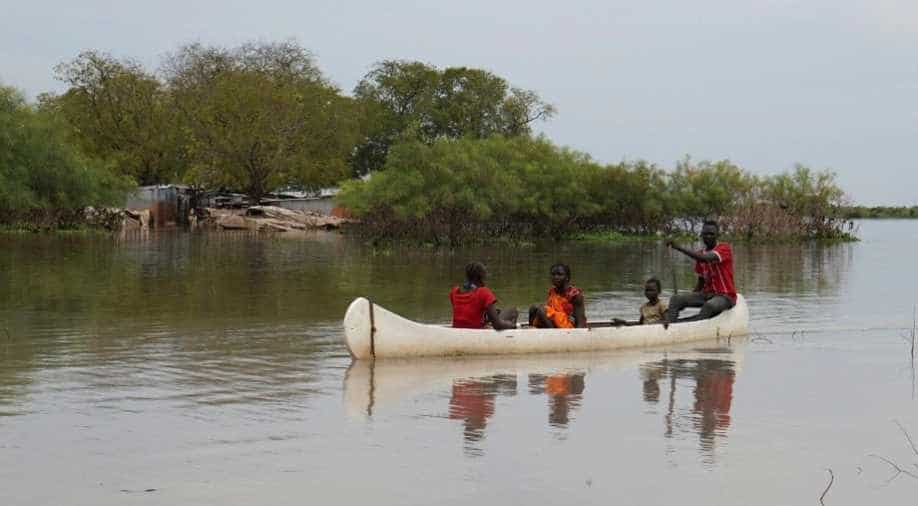 According to the UN refugee agency nearly one million people were affected by floodwaters that submerged entire towns, compounding an already dire humanitarian situation after six years of war.

Devastating flooding in South Sudan following a fierce drought could tip parts of the country into famine in the next few months, the World Food Programme (WFP) warned on Thursday.

According to the UN refugee agency nearly one million people were affected by floodwaters that submerged entire towns, compounding an already dire humanitarian situation after six years of war.

The WFP said that 5.5 million people are expected to be going hungry in early 2020 -- the time at which the population is generally benefiting from their harvest in October and November of the previous year.

An earlier harvest failed due to drought. This time crops have been washed away.

"The number of people in need is likely to increase because of the catastrophic level of destruction caused by floods since October following a drought that hammered parts of the country earlier in the year," the agency said in a statement.

The floods wiped out 73,000 metric tons of potential harvests as well as tens of thousands of cattle and goats, said the WFP.

"We know the problems that we've been having in South Sudan, but the rains and the floods have led to a national disaster and are much worse than anyone could have anticipated," said WFP Executive Director David Beasley.

"In fact, if we don't get funding in the next few weeks and months, we are literally talking about famine. We need support, we need help and we need it now."

The term "famine" is used according to a scientific system agreed upon by global agencies when at least 20 per cent of the population in a specific area has extremely limited access to basic food; acute malnutrition exceeds 30 per cent, and the death rate exceeds two per 10,000 people per day for the entire population.

"Famine in South Sudan was defeated after four months in 2017 by a concerted large-scale humanitarian response," said the WFP.

"Experts now say the country's food security outlook has never been so dire."

Political instability is also high as President Salva Kiir and his rival Riek Machar have again delayed their formation of a power-sharing government, this time by 100 days until February 2020.