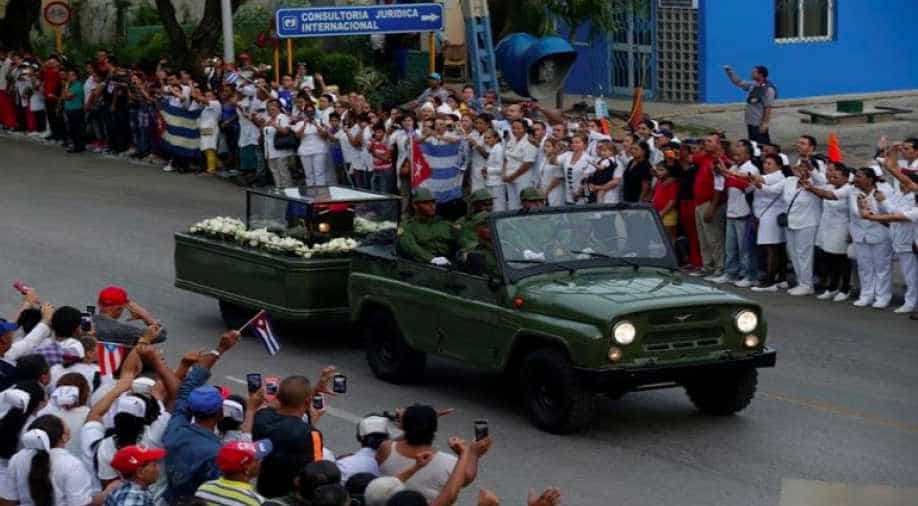 The caravan carrying the ashes of Fidel Castro passes along a street in Bayamo, Cuba on its way to the eastern city of Santiago de Cuba. Photograph:( AFP )

The ashes of Cuba’s late socialist icon Fidel Castro reached the cradle of his revolution for a final rally before burial, after an island-wide journey.

The convoy went round the eastern city, halting in front of the balcony where Castro gave a speech following his revolution’s triumph in 1959.

The ashes passed the Moncada barracks, scene of his first armed uprising in 1953, and headed to Revolution Square for an evening rally.

President Raul Castro, who took over when his brother fell ill in 2006, will deliver a much-awaited speech during the tribute with foreign dignitaries, ranging from presidents to Argentine football legend Diego Maradona, who called Fidel  his "second father."

The remains will be buried on Sunday during a private ceremony at the Santa Ifigenia cemetery,after a nine-day mourning period.

Castro’s death on November 25 at age 90 has fueled discussions about his divisive legacy and the direction the country may take without the omnipresent leader, who was in power for almost half a century.

After Fidel is laid to rest, all eyes will turn to Raul Castro’s next move. He has implemented modest economic reforms, vowed to step down in 2018 and restored diplomatic ties with the United States.

While thousands of people have gathered along the road to bid farewell, the government has encouraged Cubans to sign a pledge to defend his revolution.

Dissidents have kept a low profile during the commemoration, calling off regular protests. They plan to resume their demonstrations after Castro’s burial.