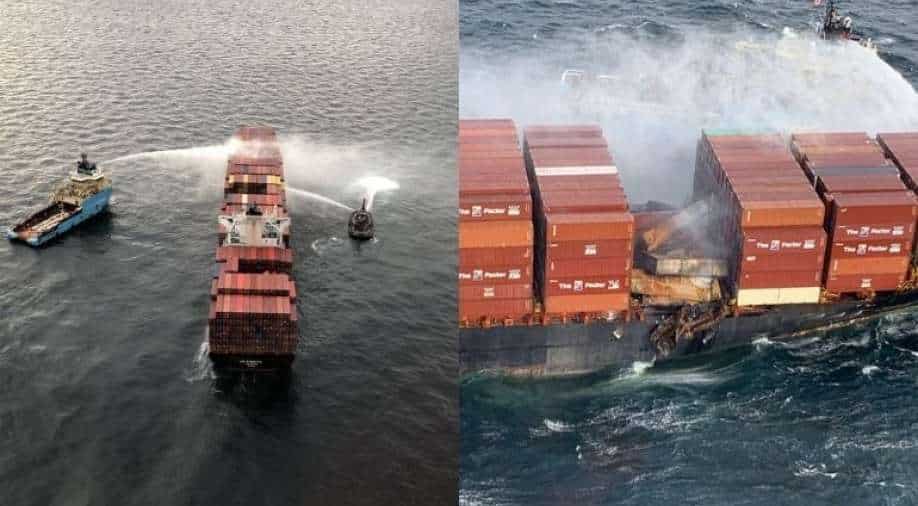 At least 16 people have been evacuated from a burning container ship by Canadian Coast Guard. It is emitting toxic gas off Canada's Pacific coast. The ship, Zim Kingston, is currently anchored off the city of Victoria in British Columbia. Fire had broken out in 10 containers

At least 16 people have been evacuated from a burning container ship, which is emitting toxic gas off Canada's Pacific coast by coast guard of the country, said authorities on Sunday.

There is "no safety risk" to people on shore, added authorities.

The ship, Zim Kingston, is currently anchored off the city of Victoria in British Columbia. It is in the Strait of Juan de Fuca, which marks the maritime border between Canada and the United States, as per the marine tracking site, MarineTraffic.

All fires produce toxic substances. Incident Command has detailed information on the chemicals that were on fire and are now smoldering in the containers onboard the #ZimKingston. pic.twitter.com/jtjhlJ1zAa

Bound for Vancouver, the ship reported about the eruption of flames to the coast guard at around 11 pm local time on Saturday, reported CBC News.

In a navigational warning on its website, the Canadian Coast Guard said, "The ship is on fire and expelling toxic gas."

On Twitter account, the coast guard later posted a statement that 16 people had been evacuated from the Zim Kingston "after a fire broke out in 10 containers."

“Emergency tow vessels, tugs and CCG monitor the ship overnight to ensure the five crew members on the ship are safe, and that the ship remains secured,” said coast guard in a tweet.

“The fire on the Zim Kingston has been stabilised. Depending on weather tomorrow, firefighters will board the ship to fight any remaining fires and ensure the fire is out,” added the coast guard.

Later, in a statement, the vessel's manager Danaos Shipping said that the incident was caused by "excessive listing due to extreme weather."

"No injuries were reported. The fire appears to have been contained and DANAOS have commissioned a Salvage & Fire Extinguishing Agency to come on board in order to ensure that conditions are appropriate for the safe return of the vessel's crew," the company added.

The coast guard said the ship was carrying more than 52,000 kilograms (115,000 pounds) of chemicals in two containers, which went up in flames, CBC News reported.