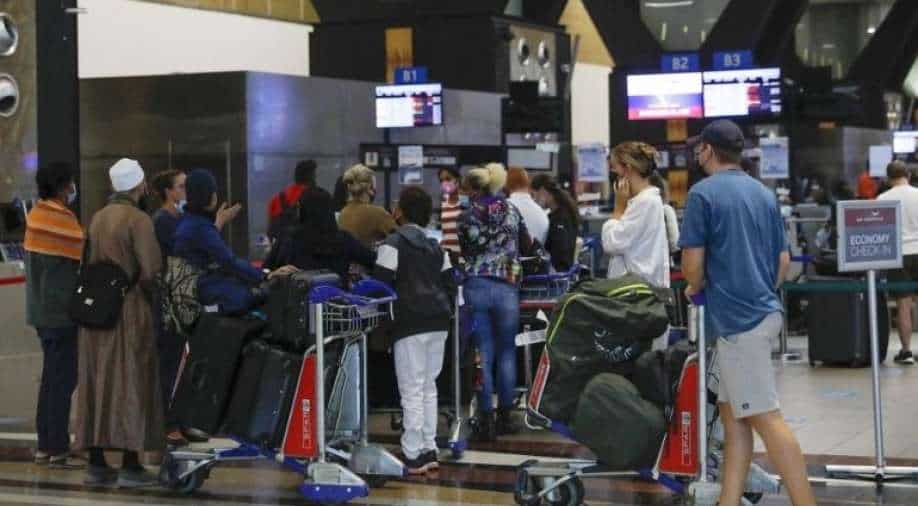 Travellers queue at a check-in counter at OR Tambo International Airport in Johannesburg on November 27, 2021, after several countries banned flights from South Africa following the discovery of a new COVID-19 variant Omicron. Photograph:( AFP )

"I was informed today by the Public Health Agency of Canada that testing and monitoring of Covid-19 cases has confirmed two cases of the Omicron variant of concern in Ontario," Health Minister Jean-Yves Duclos said in a statement.

The country's first two cases of Omicron have been discovered in Ontario, according to Canada's health minister, after two people who had just travelled from Nigeria tested positive.

They are the first instances in North America to be discovered.

Travelers who visited southern African nations in the previous two weeks are prohibited from entering Canada, according to a prohibition that took effect on Friday.

Canada's Health Minister, Jean-Yves Duclos, said in a statement that he was informed today by the Public Health Agency of Canada that testing and monitoring of COVID-19 cases had confirmed two cases of the Omicron variant of concern in Ontario.

As the monitoring and testing continues, he added, "it is expected that other cases of this variant will be found in Canada."

In the United States, no cases of the new strain have been confirmed.

According to the White House, President Joe Biden will "give an update on the new variation and the US reaction on Monday,".

Omicron has been designated as a "variant of concern" by the World Health Organization, and nations throughout the world are banning travel from southern Africa, where the new strain was initially discovered, as well as adopting other extra safeguards.

According to the WHO, finding out if there are major changes in transmissibility, severity, or consequences for COVID-19 vaccinations, diagnostics, and therapies might take several weeks.