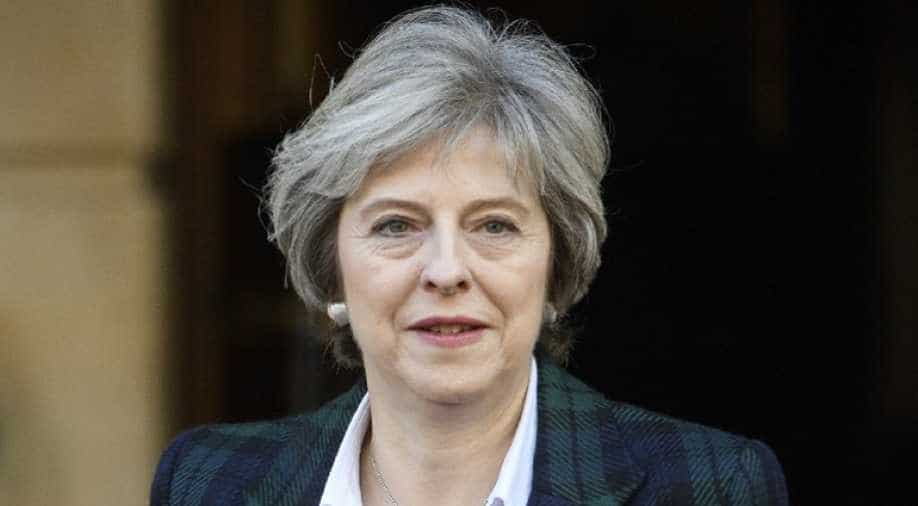 The Conservative leader also said lawmakers would get a vote on any final Brexit agreement negotiated with Brussels. Photograph:( Getty )

Prime Minister Theresa May unveiled her Brexit blueprint on Tuesday, announcing for the first time that Britain will leave Europe's single market in order to control EU immigration.

In a highly-anticipated speech, May warned the EU against imposing harsh terms on Britain's historic divorce from the bloc after more than four decades of membership.

She revealed that Britain would look to strike a new customs agreement with the EU to be able to carve out its own trade deals with the rest of the world.

In a concession to parliamentary critics, the Conservative leader also said lawmakers would get a vote on any final Brexit agreement negotiated with Brussels.

"Brexit must mean control of the number of people who come to Britain from Europe. And that is what we will deliver," May told foreign ambassadors in London.

"What I am proposing cannot mean membership of the single market."

But the European Commission's chief Brexit negotiator Michel Barnier warned that an orderly divorce from the bloc within the specified two years was a "prerequisite" for any future free trade deal.

Good deal or no deal

Britain has two years to negotiate a break-up deal once May triggers Article 50 of the Lisbon Treaty, officially declaring the country's intention to quit, or face leaving with no agreement.

May said London could accept departing on such terms if Brussels played hardball, but it would hurt the EU hardest.

May has promised to trigger Article 50 by the end of March, and said she was confident that final settlements could be negotiated within the two-year timeframe.

Seeking to calm fears of a sudden jolt to the economy on abruptly leaving the EU in 2019, May said she would seek a "phased process of implementation".

EU countries accounted for 44 percent of Britain's total exports in goods and services in 2015, with the country recording a £68.6 billion ($82.7 billion, 77.9 billion euros) trade deficit with the bloc.

Brussels has estimated the bill Britain will have to pay at 55 to 60 billion euros, EU sources told AFP.

The British currency has endured a rocky ride since the June referendum, but sterling responded strongly to May's speech, wiping out losses earlier in the week to stand at $1.2379 at 1730 GMT.

"The prime minister has adopted a more pragmatic approach to Brexit than expected, providing some much needed relief for the pound," NFS Macro analyst Nick Stamenkovic told AFP.

May hinted that Britain might undercut the EU economically if it does not get a free trade deal.

Excluded from the single market, May said London would be free to change its economic model and "set competitive tax rates".

"There are some voices calling for a punitive deal that punishes Britain and discourages other countries from taking the same path.

"That would be an act of calamitous self-harm for the countries of Europe."

Britain joined the European Economic Community in 1973 but was often an uncomfortable partner as the grouping moved to greater integration, refusing to join the euro currency or the Schengen open borders zone.

May said Britain voted to leave because Europe had not been flexible enough for voters on key issues, but Britain nonetheless wanted the EU to succeed, not unravel.

She said Britain would remain a key intelligence and security partner in Europe, as she couched her speech as repositioning Britain as an outward-looking global trading player.

Professor Anand Menon, director of The UK in a Changing Europe research initiative, said: "Her ability to achieve the ambitions she set out will ultimately hinge on what her partners are willing to give her."

"The UK is heading for a hard Brexit, which threatens to be economically catastrophic," she said.

A new independence referendum is now "even more likely".

"We also want as good, close and trusting a relationship as possible," he said.

Britain's Supreme Court is due to rule later this month on whether May must seek parliamentary approval before triggering Article 50, which could delay the start of negotiations.