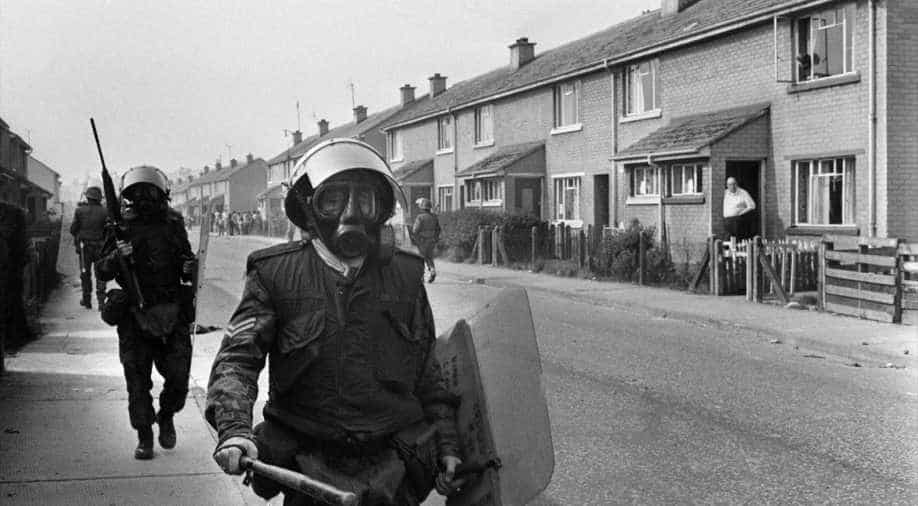 'The unnamed veteran, accused of murdering two civilians in Londonderry on January 30, 1972, did not attend the hearing in the city and the case was swiftly adjourned.'

Almost 50 years after British troops opened fire on protesters on Bloody Sunday, killing 14 people, the only murder case brought against one of the soldiers reached a Northern Irish court for the first time on Wednesday.

The unnamed veteran, accused of murdering two civilians in Londonderry on January 30, 1972, did not attend the hearing in the city and the case was swiftly adjourned.

But relatives of the Bloody Sunday victims, who gathered together to walk to the courthouse, hailed the very fact it was taking place.

Liam Wray, whose brother was killed, said it was a "historic day".

"We are glad and relieved that his day has arrived, it's been 47 and a half years," he said.

Thirteen people died that day when British troops opened fire on a civil rights demonstration in a majority Catholic area of Londonderry, while a 14th victim later died of his wounds.

In addition to two murder charges, the ex-paratrooper, identified only as "Soldier F", faces charges of the attempted murder of four others.

His case was adjourned until December 4, with the lawyer for the veteran stating his intention to challenge the bid to bring the case to trial.

Bloody Sunday has become one of the most symbolic events in the grim history of the Troubles, the conflict which gripped Northern Ireland for three decades.

But the decision to prosecute the veteran is highly divisive in the British province, which remains haunted by the legacy of unrest.

"Soldier F" was one of 17 British veterans who had faced investigation, plus two alleged paramilitaries with the Irish Republican Army (IRA), which fought British rule.

But he was the only one charged by Northern Ireland's public prosecutor in March following decades of investigation.

The announcement infuriated supporters of Britain's military intervention in Northern Ireland, prompting marches in support of the soldier in Belfast and London.

British military and political communities remain divided over the matter.

Some believe prosecutions for historic crimes betray former troops who acted in good faith, equating them with terrorists.

Others feel the military should be held to the highest standard and any amnesty would be a tacit admission of guilt among those who served with integrity.

Families of those killed broadly welcome the prospect of a trial but do not believe it alone will fully settle the matter.

"What people want is truth and justice."

The decision by the British Parachute Regiment to open fire on a civil rights march in the Bogside area helped galvanise support for the Provisional IRA in the early years of the Troubles.

A photograph of a Catholic priest waving a bloodstained handkerchief as he tried to help 17-year-old victim Jackie Duddy to safety became a defining image of the incident.

A 12-year public inquiry into Bloody Sunday the largest investigation in UK legal history concluded in 2010 that British paratroopers lost control and none of the casualties posed a threat of causing death or serious injury.

The probe prompted then-prime minister David Cameron to issue a formal state apology for the killings, calling them "unjustified and unjustifiable".

The Northern Ireland Veterans Association, which held a memorial event to mark the 50th anniversary of British military intervention earlier this year, said its members were "concerned" about such prosecutions.

"We need to learn to deal with our past," said NIVA spokesman Ian Simpson.

"We need to move forward together and have an understanding of what it meant."