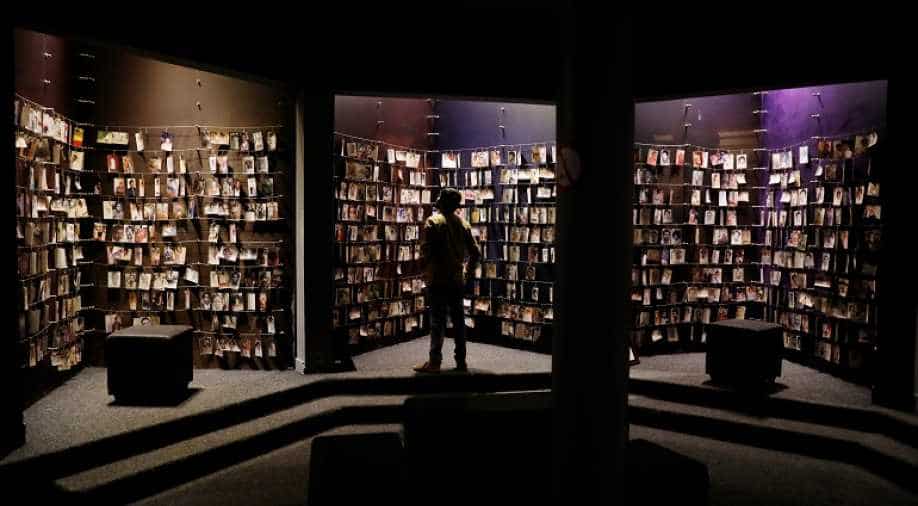 A visitor looks at an exhibition displaying pictures of the Rwandan Genocide victims donated by survivors at the Genocide Memorial in Gisozi in Kigali, Rwanda April 6, 2019. Photograph:( Reuters )

A historical commission set up by President Emmanuel Macron concluded there had been a 'failure' on the part of France under former leader Francois Mitterrand over the genocide that saw around 800,000 people slaughtered, mainly from the ethnic Tutsi minority

France bears overwhelming responsibilities over the 1994 genocide in Rwanda and was "blind" to preparations for the massacres, a report by historians said Friday, while adding there was no evidence Paris was complicit in the killings.

A historical commission set up by President Emmanuel Macron concluded there had been a "failure" on the part of France under former leader Francois Mitterrand over the genocide that saw around 800,000 people slaughtered, mainly from the ethnic Tutsi minority.

Historian Vincent Duclert, who heads the commission, handed over the damning report to Macron at the Elysee Palace after years of accusations France did not do enough to halt the massacres and was even complicit in the crimes.

The genocide between April and July of 1994 began after Rwanda's Hutu president Juvenal Habyarimana, with whom Paris had cultivated close ties, was killed when his plane was shot down over Kigali on April 6.

The issue still poisons modern relations a quarter of a century on between France and Rwanda under its controversial President Paul Kagame, a former Tutsi rebel who has ruled the mountainous nation in Africa's Great Lakes region since the aftermath of the genocide.

"Is France an accomplice to the genocide of the Tutsi? If by this we mean a willingness to join a genocidal operation, nothing in the archives that were examined demonstrates this," the report's conclusions said.

"Nevertheless, for a long time, France was involved with a regime that encouraged racist massacres... It remained blind to the preparation of a genocide by the most radical elements of this regime."

It criticised the French authorities under Mitterrand for adopting a "binary view" that set Habyarimana as an "Hutu ally" against an "enemy" of Tutsi forces backed by Uganda and then offering military intervention only "belatedly" when it was too late to halt the genocide.

"The research therefore establishes a set of responsibilities, both serious and overwhelming," it said.

Macron ordered the creation of the commission in May 2019 to analyse France's role in Rwanda from 1990-1994 through archival research.

France notably led Operation Turquoise, a military-humanitarian intervention launched by Paris under a UN mandate between June and August 1994. Its critics believe that it was in reality aimed at supporting the genocidal Hutu government.

And there have also been repeated accusations that authorities in Paris helped suspects in the Rwanda genocide to escape while under French military protection.

The report concluded that in July 1994 "murderers but also the masterminds of the genocide" were in a safe zone established by French forces in the west of the country "who the French political authorities refused to arrest."

Socialist Mitterrand and his inner circle were also fearful of the encroachment of English-speaking influence into francophone Africa under influence from Uganda and the Rwandan Patriotic Front (RPF) of Kagame.

The report tells of French decision-makers trapped in "post-colonial" thinking who supported the "racist, corrupt and violent" regime of Habyarimana facing to a Tutsi rebellion considered as directed from English-speaking Uganda.

Mitterrand "maintained a strong, personal and direct relationship with the Rwandan head of state" Habyarimana, it said.

"Hovering over Rwanda was the threat of an Anglo-Saxon world, represented by the RPF and Uganda, as well as their international allies."

French authorities behaved as if "acting in the face of a genocide was not in the realm of possibility" when there was a "moral obligation" to ensure genocides never happen again, it said.

The 15-member commission does not have any specialist on Rwanda, a move the French presidency argues was necessary to ensure complete neutrality.

But the historians -- who include experts on the Holocaust, the massacres of Armenians in World War I and international criminal law -- have been given access to archives including those of Mitterrand himself which were long closed off to researchers.

While he seeks to position France as an assertive player on the world stage, Macron has taken tentative steps to come to terms with once taboo aspects of the country's historical record, although many would like to see far bolder steps.

Historian Benjamin Stora was tasked with examining France's actions during Algeria's war of independence and he called for a "truth commission" and other conciliatory actions in a major report delivered in January.

Macron has ruled out an official apology for torture and other abuses carried out by French troops in Algeria.

The contents of the Rwanda report are likely to have a major bearing on future relations between France and Rwanda, which Macron has said he wants to visit later this year.