It also delayed the purchase of two Yuan-class S26T submarines worth $724 million highlighting China's losing grip on its key allies in Indo-Pacific Region.

In a big blow to China, Thailand on Thursday announced it will scrap a Chinese led-KRA canal project under which Beijing wanted to build a bypass to the Strait of Malacca.

It also delayed the purchase of two Yuan-class S26T submarines worth $724 million highlighting China's losing grip on its key allies in Indo-Pacific Region.

Thailand took the step after facing intense pressure from its arch-rival Pheu Thai Party and the public who had raised concerns that the proposed 120-kilometre mega canal would undermine the independence of poor Southeast Asian countries like Myanmar and Cambodia, which have comparatively weak civil societies that are highly vulnerable to Chinese interference. 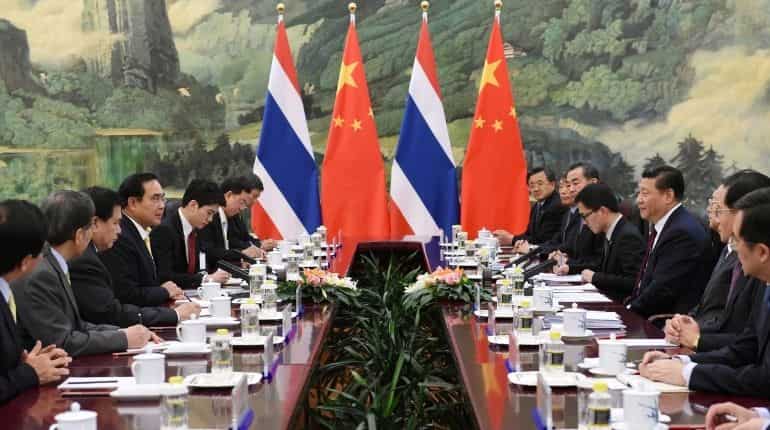 Thai Prime Minister Prayut Chan-o-cha, fourth from left, meets with Chinese President Xi Jinping, fourth from right, during a meeting at the Great Hall of the People in Beijing/Afp

After the the Galwan Valley clash in Ladakh, the Indian Navy had deployed its frontline vessels along the Malacca Straits, a strategic chokepoint between the Indonesian island of Sumatra that divides the Indian and Pacific Oceans and the Malay Peninsula.

Cutting through the Isthmus of Kra in Thailand, the KRA canal project, could have been a crucial strategic asset for China, allowing the Chinese navy to move freely and quickly between its newly constructed bases in the South China Sea and the Indian Ocean.

Through the project, China could have put an end to the Malacca dilemma by bypassing the Strait of Malacca, a narrow chokepoint between the Malay Peninsula and the Indonesian island of Sumatra that divides the Indian and Pacific Oceans.

Trump tries to distance himself from Kanye, calls him 'seriously troubled man, who just happens to be black'