Biden rallies global democracies as US hits a 'rough patch' 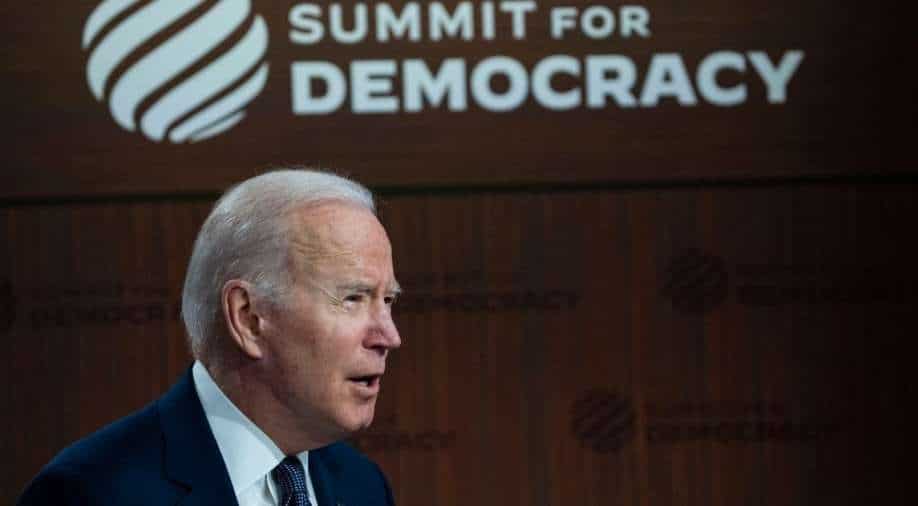 A few days before President Joe Biden’s Summit for Democracy, a virtual meeting of more than 100 countries that opened Thursday, the Chinese foreign ministry released a stinging report about the American democratic system.

The “gunshots and farce on Capitol Hill have completely revealed what is underneath the gorgeous appearance of the American-style democracy,” the Chinese report said, citing the Jan. 6 riot. In a country where “money decides everything,” the report charged, “an entrenched political paralysis” renders governing impossible.

A spokesperson for the Russian foreign ministry struck a similarly contemptuous tone in late November. “The United States claims the right to decide who is worthy of being called a democracy and who is not,” said the spokesperson, Maria Zakharova, according to Tass, the state news agency. “It certainly looks cynical. I would say that it looks pathetic, given the state of democracy and human rights in the United States and in the West in general.”

A backlash from authoritarian governments that were not invited to a summit meeting meant to support democratic values is hardly surprising.

But even U.S. officials concede that American democracy is straining from political polarization, racial injustice and discord, voting rights restrictions and domestic extremism, among other issues. Some activists are urging Biden to devote more attention to problems at home before turning his focus abroad.

“You can’t try to export and defend democracy globally when you can’t protect it domestically,” said Cliff Albright, a co-founder and executive director of the Black Voters Matter Fund, a progressive nonprofit group in Atlanta. “You can’t be the global fireman when your house is on fire.”

That tension will loom over the two-day virtual gathering of leaders from model democracies like Germany, Japan and Sweden to countries with mixed records such as Georgia, Nigeria and Pakistan. The meeting, which also includes journalists, civil society activists and business leaders, is meant to be a forum for democracies to exchange ideas and critiques, U.S. officials say. Participants will also make commitments on political reform, corruption, human rights and other matters.

“The U.S. is clearly going through a rough patch right now,” said Michael J. Abramowitz, the president of Freedom House, a nonpartisan group dedicated to human rights and democracy. The United States ranked 50th on Freedom House’s annual index of global freedom, he said. Last month, the Stockholm-based International Institute for Democracy and Electoral Assistance placed the United States on its list of “backsliding democracies.”

Domestic shortcomings should not deter the United States from promoting its core values where authoritarianism and populism have gained traction in recent years, Abramowitz said, “as long as it’s done with humility.”

“Without United States engagement and leadership, the cause of democracy will not advance,” he said. “Who else will do it?”

Biden has said the world stands at a historical “inflection point” in the contest between democracy and autocracy. He has also vowed to show that the U.S. system is superior to more centralized models, like China’s, which brook little dissent. Administration officials say they meet that challenge but have no illusions about their domestic troubles.

“We approach this week with both humility and confidence,” Uzra Zeya, the undersecretary for civilian security, democracy and human rights, told reporters at the State Department on Tuesday.

She added: “Humility in that we want to listen and learn and don’t shy away from our shortcomings; confidence in our constant striving for a more perfect union; and our certainty that, working together, democracies can and will deliver for the world’s citizens, regardless of the raw deal that autocrats and authoritarians try to sell.”

But others cautioned against moving the spotlight overseas while problems festered at home. The federal authorities have said that violent domestic extremists continue to be emboldened by false claims about the 2020 election. Former President Donald Trump is fighting in court to block the release of documents requested by a congressional committee investigating the mob attack on the Capitol. And Republicans have passed voting restrictions in 19 states this year.

While Biden has called defending the right to vote an urgent priority, many of his supporters complain that federal legislation to bolster voting rights, standardize basic election rules and outlaw gerrymandering has not advanced in Congress.

A White House fact sheet issued before the summit cited the passage of his bipartisan infrastructure plan as a prominent example of a functioning democracy. But Marc H. Morial, the president and chief executive of the National Urban League, said that more action was needed on domestic threats to democracy. He called the summit “a missed opportunity.”

The Biden administration could also use the summit to set out longer-term plans to work with other countries facing similar threats to democracy, said Rachel Kleinfeld, a senior fellow in the Carnegie Endowment for International Peace, a Washington think tank. For example, officials could strategize on ways to crack down on U.S. extremist groups increasingly making connections overseas, she said.

“American democracy at home and global democracy abroad are in dire need of strategy, of improvement, because both are facing swift recession,” Kleinfeld said. “But a summit is not a strategy. In fact, a summit has been a distraction.”

Domestic issues are not the only potential source of awkwardness at the meeting, which started off with remarks from Biden and will feature sessions with heads of state and more than a dozen events.

The administration has also faced questions over its criteria for invitations. Critics have questioned the inclusion of countries like the Philippines, which the State Department has condemned for extrajudicial killings, and Pakistan, which the United States accused of “forced disappearance by the government or its agents; torture; and cases of cruel, inhuman or degrading treatment or punishment by the government.”

Freedom House found that Georgia was affected by the influence of oligarchs over its politics and news media, and that Nigeria, Africa’s largest democracy, had endemic corruption and permitted the harassment and arrests of journalists.

“I would not have thrown a party in quite this way,” Kleinfeld said of the “broad tent” of invitees.

Hungary and Turkey, which are NATO members, were not invited; nor were several other countries that identify as democracies but have records of repression. Singapore was also left out, though Defense Secretary Lloyd Austin and Vice President Kamala Harris both traveled there this year to promote its relationship with the United States as an ally in the South China Sea.

“The decision to not invite robust democracies like Singapore and Bhutan underscores that democracy is in the eye of the beholder,” said Curtis S. Chin, a former U.S. ambassador to the Asian Development Bank.

Brazil, Latin America’s largest — but increasingly authoritarian — democracy, also was not invited; nor were Egypt Saudi Arabia or the United Arab Emirates.

Jen Psaki, the White House press secretary, said this week that the invitations should not be treated as a “stamp of approval on their approach to democracy.”

“This is an opportunity, again, not to celebrate everything we’ve done on democracy, either for the United States or all these countries, and call it a day,” she said. “It’s an opportunity to continue to strive to do better.”