As Joe Biden and Kamala Harris make history in US, reactions from world leaders pour in 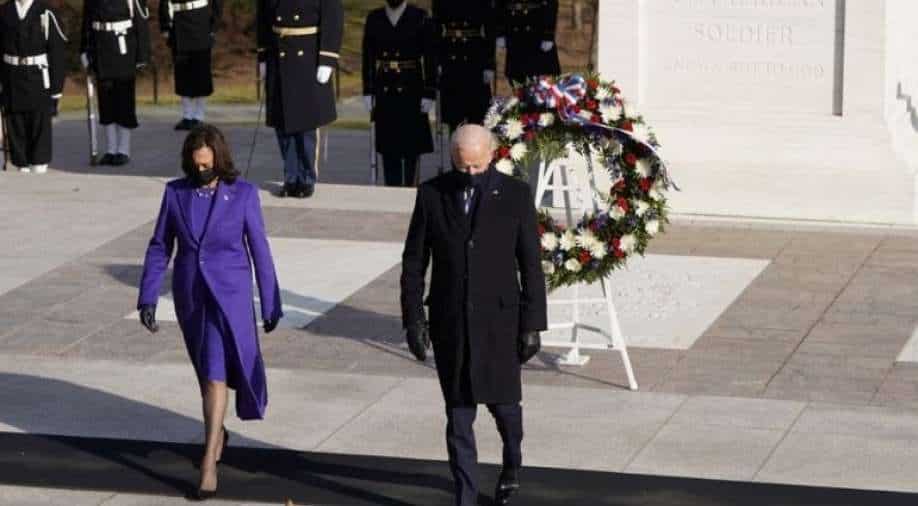 US President Joe Biden and Vice President Kamala Harris lay a wreath at the Tomb of the Unknown Soldier in Arlington Cemetery in Arlington, Virginia, after being sworn in, on January 20, 2021. Photograph:( AFP )

On January 20, 2021, Joe Biden took oath as the 46th President of the United States, along with Vice President Kamala Harris. Soon after being sworn in, leaders from across the world congratulated the new president, wishing him all the best. Here are some reactions

On January 20, 2021, Joe Biden took oath as the 46th President of the United States, along with Vice President Kamala Harris. Soon after being sworn in, leaders from across the world congratulated the new president, wishing him all the best. Here are some reactions.

My warmest congratulations to @JoeBiden on his assumption of office as President of the United States of America. I look forward to working with him to strengthen India-US strategic partnership.

United Kingdom's Prime Minister also congratulated Biden on being sworn in. He also wished Kamala Harris all the best.

Congratulations to @JoeBiden on being sworn in as President of the United States and to @KamalaHarris on her historic inauguration. America’s leadership is vital on the issues that matter to us all, from climate change to COVID, and I look forward to working with President Biden.

Pedro Sanchez, the Prime Minister of Spain also posted a message, calling it a ''great day''

Today is a great day. The Administration of @JoeBiden and @KamalaHarris begins its journey. All the successes and support of Spain in this era of hope and future. We'll work with the US for democracy and the reinforcement of a more just, sustainable & inclusive global governance.

Vice President @KamalaHarris, my warmest congratulations! I look forward working with you and the new administration. Finland wants to strenghten our good relations and cooperation even further. Climate, equality and human rights need strong voices.

Congratulations to @KamalaHarris on being sworn-in as @VP. It is a historic occasion. Looking forward to interacting with her to make India-USA relations more robust. The India-USA partnership is beneficial for our planet.

Thank you for the inspiring inaugural address and for the offer to cooperate.

Russian President Vladimir Putin is yet to congratulate Biden, but a statement from the Russian Foreign Ministry said the following - "We expect that the new US administration will take a more constructive approach in its dialogue with us... We are ready for such work on principles of equal rights and taking mutual interests into account."

Today a true friend of Ireland @JoeBiden became the 46th President of the USA. As he said in his speech, it is a day of history and hope and I look forward to forging ever closer ties between our two great nations. #InaugurationDay

Today @JoeBiden takes office as the 46th U.S. President. His Administration will have the mission of healing the soul of the country and strengthening civic friendship.

The commitment to democracy, freedom and human rights recognizes no borders.
I wish President Biden the best.

Congratulations to President @JoeBiden and Vice President @KamalaHarris on your inauguration. Japan and the United States are allies tied firmly by bonds and shared universal values.

France's Macron forwarded "Best wishes on this most significant day for the American people!"

To @JoeBiden and @KamalaHarris.
Best wishes on this most significant day for the American people!
We are together.
We will be stronger to face the challenges of our time. Stronger to build our future. Stronger to protect our planet. Welcome back to the Paris Agreement!

Justin Trudeau, the Prime Minister of Canada wished both Biden and Harris good luck, promising to continue their partnership

Congratulations, @JoeBiden, on your inauguration as the 46th President of the United States. Our two countries have tackled some of history’s greatest challenges together - and I’m looking forward to continuing this partnership with you, @KamalaHarris, and your administration.