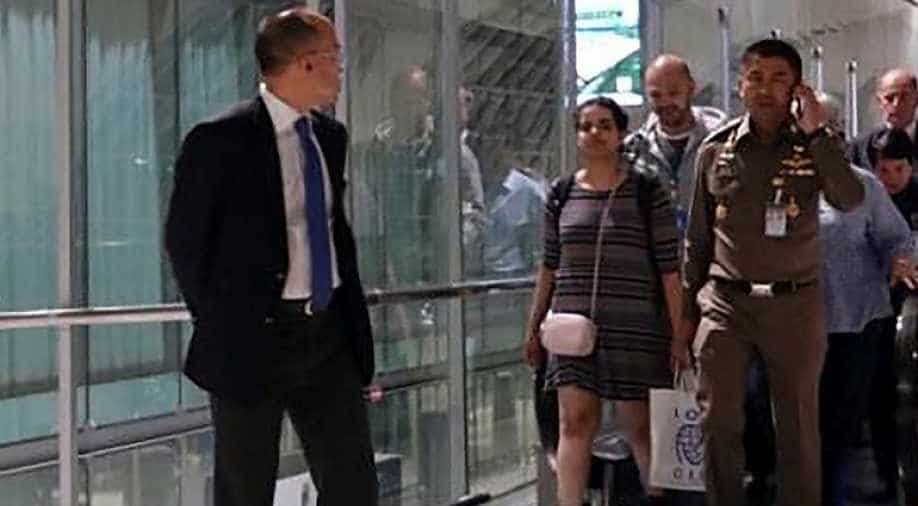 Canada said Friday it would grant refugee status to 18-year-old Rahaf Alqunun, after a weeklong asylum bid that spurred some Saudis to question whether the male-guardianship system still has a place in a kingdom where social mores are quickly changing.

A young Saudi woman's flight from her family and country has stirred debate in Saudi Arabia about its requirement that women get permission from a male guardian to travel or marry, according to a Dow Jones Newswires report made available to EFE on Saturday.

Canada said Friday it would grant refugee status to 18-year-old Rahaf Alqunun, after a weeklong asylum bid that spurred some Saudis to question whether the male-guardianship system still has a place in a kingdom where social mores are quickly changing.

Saudi women can now drive, attend soccer matches with men and work in any field, but they can't travel freely without a guardian. Saudi women are treated as minors in many legal matters, including marriage and being released from prison, requiring authorisation from a male guardian - father, husband or even a son.

Legally nonbinding social customs often force women to demonstrate their guardian's consent to work, get health care and conduct transactions such as renting an apartment, according to a 2016 Human Rights Watch report.

"No one of sound mind can rationalise the idea of the guardianship system," said a Saudi named Bandar, in a video posted this week on Twitter. "It's what's making girls wishful to leave their country and live somewhere else from the country they were raised in."

The post was among thousands with hashtags related to Alqunun or the guardianship system that have trended on Twitter in Saudi Arabia since her case exploded into public view this week.

Alqunun fled on Saturday during a family trip to Kuwait, where she was able to board a flight to Thailand without a guardian's permission.

She was stopped by Thai authorities, but refused efforts to send her back to Saudi Arabia, saying she had renounced Islam and feared her family would harm her.

Alqunun said she had a visa for Australia and planned to seek asylum there, but on Friday, Prime Minister Justin Trudeau said Canada had granted her refugee status.

A Saudi diplomatic official in Thailand told Saudi television that Alqunun's father said she wasn't a victim of violence.

Saudi guardianship laws are generally unpopular in more cosmopolitan Saudi cities such as Riyadh and the Red Sea port of Jeddah.

But they remain an important part of life in more conservative areas, and the government would face intense opposition if it moved to undo the guardianship system.

While some other Muslim countries have male-guardianship traditions, Saudi Arabia goes the furthest in enshrining these customs in law and carrying them out in practice, drawing on its ultraconservative interpretation of Islam.

Many people have come out in defense of the guardianship system this week, arguing that it promotes conservative morals and traditional Saudi values.

"If the guardianship is dropped, what more will happen? Go out and see the loose women on the streets with their loud voices," said Abdulhamid Alodeilh in a Twitter post.

Faisal J. Abbas, the editor in chief of the pro-government Saudi newspaper, Arab News, wrote in an op-ed on Thursday that there was little room for guardianship laws amid the social change sweeping Saudi Arabia.

"Male guardianship over women in Saudi Arabia - or anywhere in the world - is wrong and discriminatory, and all forms of this outdated practice should be abolished," he wrote in the essay, which got widespread attention.

Until this week, the debate over the Saudi guardianship system had been muted, in part because the government has jailed a host of prominent womens-rights activists, Dow Jones added in a report made available to EFE.

Among the detained is Aziza al-Yousef, a retired professor and a vocal advocate for scrapping male permissions for travel and other matters.

The arrests are part of a broad crackdown on Saudi civil society by Crown Prince Mohammed bin Salman, who has also targeted business leaders and clerics in his bid to consolidate power and stifle dissent over his disruptive policies.

Without well-connected activists advocating for abolishing guardianship laws, it isn't clear how this week's calls for change could be sustained, said Kristin Diwan, a senior resident scholar at the Arab Gulf States Institute in Washington. "That clearly affects the room for an open debate," she said.

The Saudi government has accused the activists of terrorism and working with hostile foreign governments. No charges have been publicly leveled against them.

Some guardianship opponents had looked with hope to King Salman and his son, Prince Mohammed, when they came to power in 2015.

A movement called "I Am My Own Guardian" sprang up in 2016. Hundreds of women sent telegrams to King Salman that year, asking him to change guardianship laws.

In April 2017, the king made a gesture that was seen as a positive signal, clarifying that government agencies shouldn't require a guardian's permission unless specifically required to do so under the law.

Prince Mohammed, the 33-year-old in line to succeed his father, spearheaded lifting of the ban on women driving and has pushed other popular reforms, such as disempowering a religious police force that often harassed and even jailed women for how they dressed.

But he has been noncommittal about ending guardianship laws, saying it was for Islamic scholars to study.

Some Saudis this week said the kingdom's laws weren't the real impediment to change, but that the rules come from biases against women ingrained deep in society.

Writing with a hashtag about lifting the "travel ban," a Twitter user named Nahawnd said Prince Mohammed would eventually overcome "this backward society and prevailing mind-set."