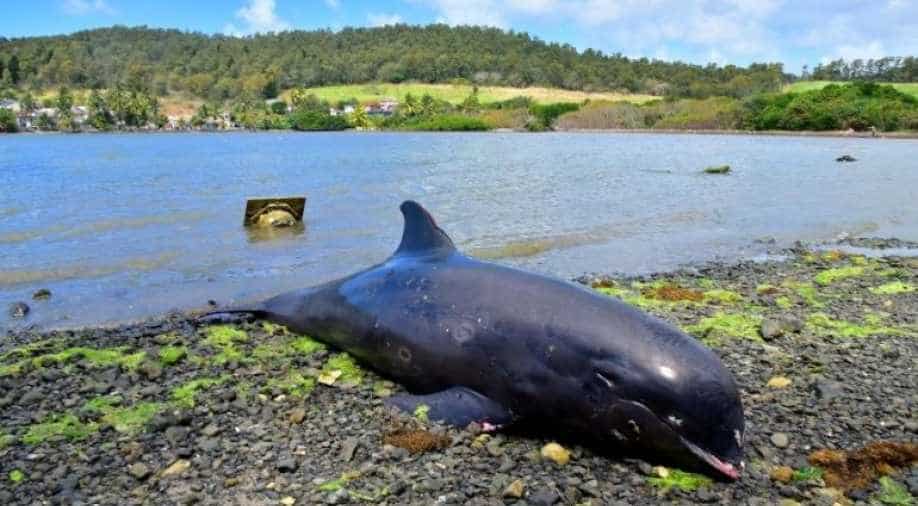 A carcass of a dolphin that died and was washed up on shore is seen at the Grand Sable, Mauritius Photograph:( Reuters )

Environmentalists are urgently seeking an explanation for the mysterious deaths of 27 dolphins which washed ashore on Wednesday and Thursday, to determine whether they were killed by the spill.

Dead dolphins that washed up in Mauritius near the site of an oil spill have so far been found to have wounds on their bodies but no trace of oil, preliminary autopsy results released on Thursday said.

Environmentalists are urgently seeking an explanation for the mysterious deaths of 27 dolphins which washed ashore on Wednesday and Thursday, to determine whether they were killed by the spill.

Scientists fear the toxic spill could hurt wildlife for many years on islands that depend on tourism.

So far, veteranarians have examined only two of the dolphins. Authorities say autopsies will be performed on the rest.

"The preliminary results show that the animals did not have trace of hydrocarbon in their respiratory system, nor in their skin, throat or stomach," the report said. Both of the dolphins examined so far bore signs of injuries, it said.

The Japanese-owned MV Wakashio, a bulk carrier, ran aground on July 25 and began to spill oil about a week later. The ship was scuttled on Monday.

The autopsy on the first two was conducted by the government-run Albion Fisheries Research Centre.

"The autopsy will be carried out on all other dolphins," said Jasvin Sok Appadu from the fisheries ministry.

Local environmental group Eco-Sud called for the full autopsy results to be released publicly. International environmental pressure group Greenpeace called on the government of Mauritius to launch an inquiry to determine whether the deaths were linked to the oil spill.