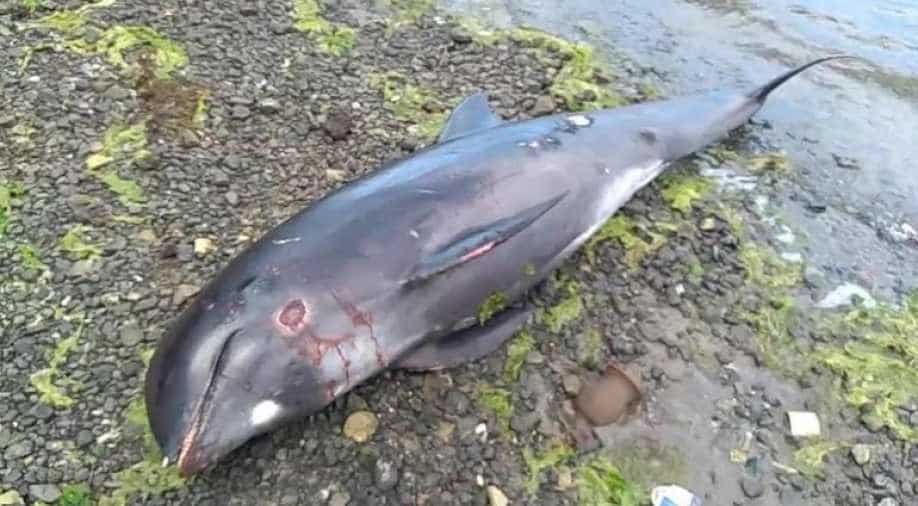 A melon-headed whale, a member of the dolphin family, washed up on Mauritius shore Photograph:( AFP )

The whales, some of which were still alive when they were found and later died, were stranded on the south-eastern beaches of Grand Sable, and some of them had injuries.

Eighteen melon-headed whales washed up on the shores of Mauritius on Wednesday, the country's fisheries minister said, dismissing any link to a devastating oil spill earlier this month.

The dolphins, some of which were still alive when they were found and later died, were stranded on the south-eastern beaches of Grand Sable, and some of them had injuries.

Fisheries minister Sudheer Maudhoo told a press conference that all 18 of the whales, a member of the dolphin family, had died, but that there was "no trace of hydrocarbons on them or in their respiratory system".

An autopsy of the animals was being carried out on Wednesday evening. According Preetam Daumoo, a local government official said that he, like many residents who found the bodies, feared the stranding was a result of the island's recent oil spill.

Earlier this month a Japanese-owned bulk carrier ran aground on a coral reef around 10 kilometres from Grand Sable, spilling over 1,000 tonnes of fuel into the pristine waters.

The broken stem of the vessel was sunk in the open ocean on Monday. However, experts said it was too soon to say what had caused the deaths of the animals.

Owen Griffiths of the Mauritius Marine Conservation Society said "it is probably a very unfortunate coincidence", referring to a similar stranding in 2005 when 70 melon-headed whales stranded in the same area.

"Likely they followed a school of fish into the lagoon, got confused, could not find their way out to sea again and tried to head out to sea directly over the coral reef instead of finding the pass. In their panic and stress they collided with corals, became exhausted and died," he said.

"At this stage we have no idea of cause of death. An autopsy with stomach content analysis and lung examination, to look for oil traces, needs to be done."

Greenpeace called in a statement for an "urgent investigation" into the cause of the strandings.

Authorities and experts from Japan and Britain are still investigating the true extent of the ecological damage to an island whose economy depends heavily on tourism.

Initial reports suggest no major damage to the ocean floor or coral reef, however the remaining wreck is still grinding against the reef where it ran aground.

"If this situation continues, it could cause stress to the corals and could kill them," said Noriaki Sakaguchi, an ecosystems expert with Japan International Cooperation Agency.

The team of Japanese experts said Tuesday that the spilled oil has also reached the soft soil of mangrove forests along the coastline.

While there is no evidence of mangrove death yet, the oil could kill plants in the protected area in coming months, the team warned.