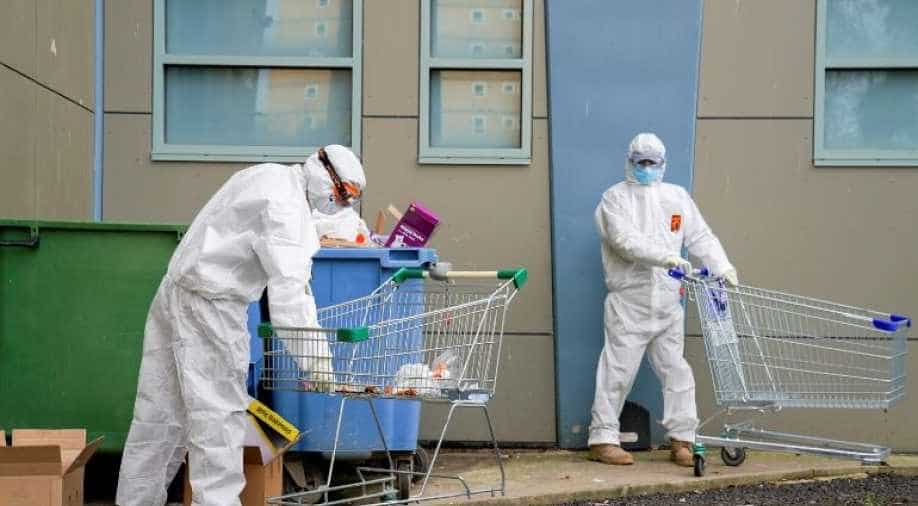 Response personnel dispose of rubbish outside a public housing tower, reopened the previous night after being locked down in response to an outbreak of the coronavirus disease (COVID-19), in Melbourne, Australia, July 10, 2020. Photograph:( Reuters )

Almost mid-way through a six-week lockdown imposed in early August, Victorian premier Daniel Andrews said he was hopeful the toughened restrictions were working

Australia's second most populous state, Victoria, reported 13 new coronavirus deaths in the 24 hours to Saturday morning, authorities said, while new infections in the hotspot state remained below 200 for the second consecutive day.

Other than in Victoria, which accounts for over 80 per cent of the country's COVID-19 deaths due to a second wave of infections, Australia has large avoided the high casualty numbers of many nations with just under 24,500 infections and 472 deaths.

"It's great to see two days in a row under 200, certainly we are trending down," said Brett Sutton, the state's chief health officer.

"The best way to safeguard against a third wave is to bring that number down to the lowest feasible, possible level."

The state, home to about one in four Australians, had reported 179 new cases and nine deaths a day earlier, down from over 700 a day two weeks ago.

Almost mid-way through a six-week lockdown imposed in early August, Victorian premier Daniel Andrews said he was hopeful the toughened restrictions were working.

"It's difficult, it's painful, I know, but if we can just stay the course then we will get to the other side of this. Then we'll be able to open up," he said.

Meanwhile, the north eastern state of Queensland introduced an immediate 10-people cap to all gatherings in Brisbane, its capital, after a small outbreak was found at a youth detention centre, Premier Annastacia Palaszczuk said.