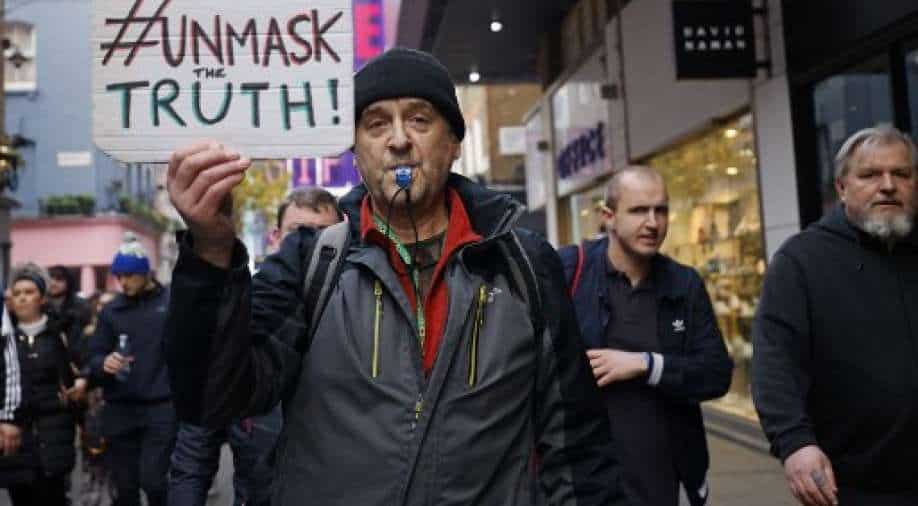 People walked through Oxford Street and nearby Marble Arch as police asked protesters to leave.

As England braces for tier 3 measures after the nationwide lockdown on December 2, anti-lockdown protesters took to the streets in London as scuffles broke out with police.

Reports said police arrested at least 60 people as the Metropolitan Police said there were a number of different offences, including breaching coronavirus restrictions.

People walked through Oxford Street and nearby Marble Arch as police asked protesters to leave.

The UK government has enforced strict lockdown measures amid a surge in coronavirus cases.

Britain currently has over 1.6 million coronavirus cases and more than 58,000 fatalities which is the highest in Europe accounting for nearly two-thirds of fatalities in the continent.

The protesters chanted "freedom" as they took part in anti-lockdown demonstrations.

PM Johnson's government had imposed strict lockdown rules in November as coronavirus cases began to rise in the country even as it declared tier 3 lockdown would be in place for much of northern England affecting millions of people.

Lawmakers will vote on the new restrictions on December 1 as over 20 million people will be forced to live under tough coronavirus restrictions.

Meanwhile, government scientists said the virus in Britain has retreated slightly with new infections shrinking between 0 per cent and 2 per cent every day.

Amid the grown coronavirus fatigue, PM Johnson said although he understands the frustration, but added that "we're coming out of the tough autumn measures with the incidence of the disease still really pretty high."

"It's about one 80, one in 85 people in this country have it, and what we all need to do is use the this tough tiering," the UK PM said, adding,"the tough tiering to drive the disease down, both in tier three and the tier two areas until the vaccine comes on stream, which it will, we hope, over the next weeks and months."