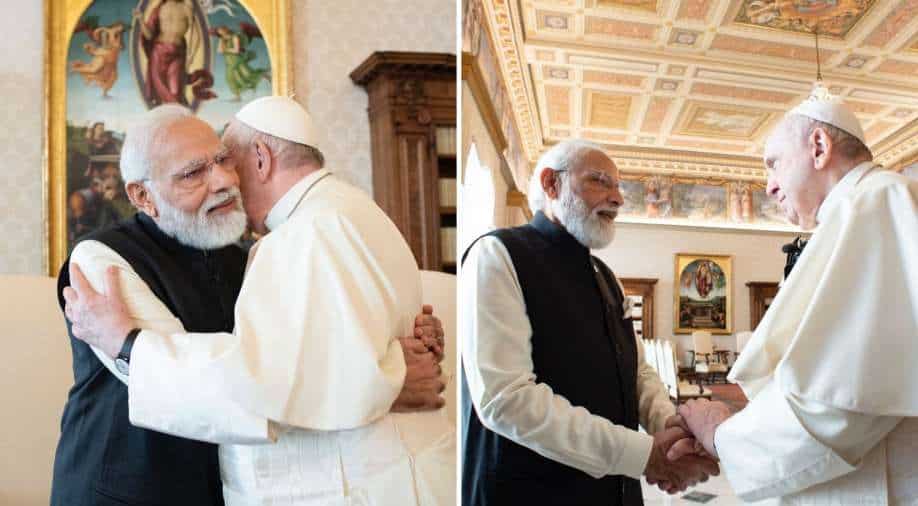 Prime Minister Narendra Modi's meet with Pope Francis and secretary of state of the Vatican lasted for more than an hour, according to officials

Prime Minister Narendra Modi called on Pope Francis at the Vatican on Saturday and invited the head of the Catholic Church to visit India.

According to officials, the prime minister's meeting with the pope lasted for more than an hour.

Notably, the last Papal visit by an Indian leader happened in 1999 when Atal Bihari Vajpayee was the prime minister and Pope John Paul II visited India.

During their meeting, PM Modi and the Pope discussed a wide range of issues including climate change and poverty.

"PM Modi had a very warm meeting with Pope Francis at the Vatican. A meeting that was scheduled only for twenty minutes went on for an hour," said an official who didn't wish to be named.

Modi is the fifth Indian Prime Minister to meet the head of the Roman Catholics. Before him, prime ministers Jawaharlal Nehru, Indira Gandhi, I K Gujral and Atal Bihari Vajpayee had met the then popes at the Vatican.

Had a very warm meeting with Pope Francis. I had the opportunity to discuss a wide range of issues with him and also invited him to visit India. @Pontifex pic.twitter.com/QP0If1uJAC

While briefing media on the details of the prime minister’s engagements in Italy, India’s Foreign Secretary Harsh Vardhan Shringla on Friday had said, “The Prime Minister will have a separate call. He will be meeting his Holiness on a one-on-one basis. And that could, after a certain period of time, be followed up by delegation-level talks.”

Shringla said health issues, COVID-19 might be the agenda of the talks, but he quickly added that the Vatican has not set any agenda.

“I believe tradition is not to have an agenda when you discuss issues with His Holiness. And I think we respect that. I'm sure the issues that will be covered will cover a range of areas of interests in terms of the general global perspectives and issues that are important to all of us,” he said.

Earlier, in India, Modi’s visit was welcomed by the Catholic Church. Even before the government officially announced the visit, the president of the Kerala Catholic Bishops Conference, Cardinal George Alenchery, issued a statement saying that it would “add more energy and warmth to the relations between our country and the Vatican and the Catholic Church”.

On Thursday, PM Modi, before leaving for Italy for the G20 Summit, had said that he would be visiting Rome and the Vatican City from October 29-31.

“During my visit to Italy, I will also visit the Vatican City, to call on His Holiness Pope Francis and meet Secretary of State, His Eminence Cardinal Pietro Parolin,” he said.