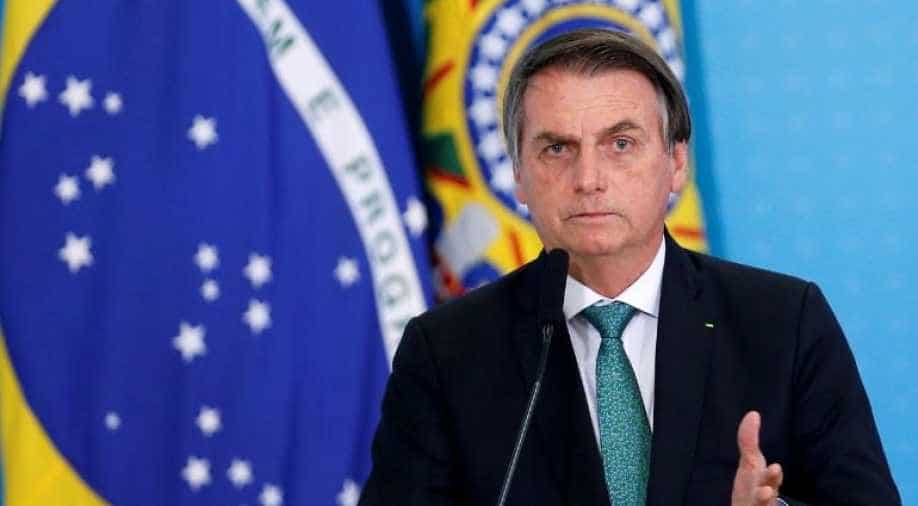 "Look at the killing of whales sponsored by Norway," Bolsonaro wrote on Twitter. Photograph:( Reuters )

Amid a global chorus of concern and condemnation, Brazil's right-wing President Jair Bolsonaro pledged in an address to the nation to mobilise the army to help combat the blazes, while his administration launched a diplomatic charm offensive to try to mend bridges overseas.

European leaders on Friday threatened to tear up a trade deal with South America, reflecting growing international anger at Brazil as a record number of fires in the Amazon rainforest intensified an unfolding environmental crisis.

Amid a global chorus of concern and condemnation, Brazil's right-wing President Jair Bolsonaro pledged in an address to the nation to mobilise the army to help combat the blazes, while his administration launched a diplomatic charm offensive to try to mend bridges overseas.

Forest fires in the Brazilian Amazon, which accounts for more than half of the world's largest rainforest, have surged in number by 83% this year, according to government data, destroying vast swathes of a vital bulwark against global climate change.

French President Emmanuel Macron called for G7 leaders to discuss the environmental crisis in Brazil at a summit this weekend in the French coastal resort of Biarritz. Both France and Ireland threatened to oppose an EU trade deal struck in June with a regional South American bloc following Brazil's response.

Images of fires raging in the Amazon broadcast around the globe sparked protests outside Brazilian embassies from Mexico City and Lima to London and Paris.

In the Cypriot capital Nicosia, a sign tied to the railings of Brazil's diplomatic mission read: "The Amazon belongs to Earth not to the Brazilian president."

Bolsonaro, who initially accused non-governmental organisations of setting the forest on fire without providing any evidence, said in a televised address he had authorised the use of troops to fight the fires and stop illegal deforestation in the Amazon.

But the former military officer attributed the scale of the fires to drier-than-average weather and insisted on the need for economic development of the Amazon to improve the lives of its 20 million inhabitants.

Environmentalists have warned that his controversial plans for more agriculture and mining in the region will speed up deforestation.

"We have to give the population the opportunity to develop and my government is working for that, with zero tolerance for crime - and that is no different for the environment," Bolsonaro said in his televised speech.

Polls show Brazilians overwhelmingly oppose his policy on the environment and as he spoke to the nation, residents in large cities across Brazil banged on pots and pans in a traditional Latin American form of protest.

US President Donald Trump - whose sceptical views on climate change Bolsonaro shares - called the Brazilian president to offer help, if needed, in dealing with the wildfires.

"I told him if the United States can help with the Amazon rainforest fires, we stand ready to assist!" Trump said in a post on Twitter.