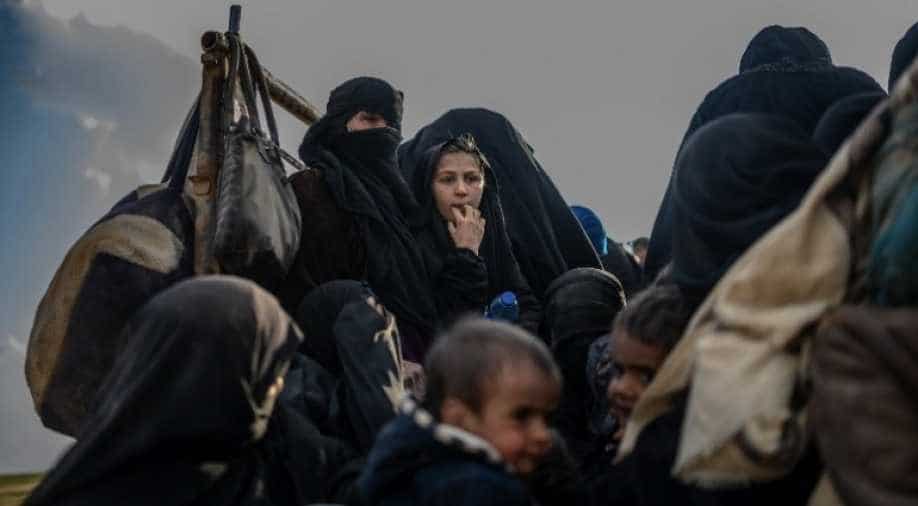 Defiant and angry, she is one of 2,000 people evacuated Friday from the jihadists' final scrap of territory in the village of Baghouz near the Iraqi border.

"My son will grow up to become a jihadist," a woman cried proudly as she stepped off a bus ferrying people out of the Islamic State group's last sliver of territory in eastern Syria.

Defiant and angry, she is one of 2,000 people evacuated Friday from the jihadists' final scrap of territory in the village of Baghouz near the Iraqi border.

At a screening point run by the US-backed Syrian Democratic Forces close to the village, women clad in black sat on the barren desert floor waiting to be searched by the Kurdish-led fighters.

When asked where they came from, a group of three veiled women sitting on the rocky terrain said they were "followers" of IS's so-called "caliphate".

One of them, who refused to give her name but said she was Syrian and originally from the area, burst with anger when asked about the desperate conditions among the holdout jihadists.

"Who says we were hungry?" she asked, while gently nursing a newborn baby.

"In a house that has dates, the resident doesn't go hungry," she added.

Like many of those with her, she refused to acknowledge the steadily approaching end of IS's so-called "caliphate".

Declared across swathes of Syria and Iraq in 2014, the proto-state once the size of the United Kingdom has been rolled back to just a few blocks of homes in the desert hamlet.

She insisted the jihadists had only "stumbled", adding she never wanted to leave their final patch of territory.

"Had the caliph not ordered it, we would not have left," she said, referring to IS supremo Abu Bakr al-Baghdadi who remains at large.

"I hope the Islamic caliphate will return and spread across all corners of the globe."

US-backed forces have evacuated nearly 5,000 men, women and children from the jihadist holdout since Wednesday, bringing the SDF closer to retaking the less than half a square kilometre still under IS control.

The SDF is trying to pull out the remaining civilians before pressing on with a final push to crush the jihadists unless they surrender first.

Amid the wails of hungry infants at the screening point, another Syrian woman was similarly bold and unapologetic.

"We were scared of air strikes and nothing else," said Umm Abdul Rahman, from the southern province of Daraa, referring to life inside IS-held Baghouz.

"We feel very bad right now, but the Islamic caliphate, God willing, will not be defeated," said the 25-year-old.

She said she quit the redoubt with her husband, a wounded jihadist who she claimed has not fought in the battle for years.

"We were comfortable" in Baghouz, she said.

When asked about IS leader Baghdadi, she said she was "proud he's our caliph".

"We used to only listen to his speeches," she said, suggesting she had not seen him in person.

After all, "he is the caliph and of course he is being monitored by everyone", she added.

"Is it possible for him to just appear in person?" she asked rhetorically.

Pronounced dead on several occasions, Baghdadi has not been seen in public since he declared the "caliphate" in 2014.

An Iraqi intelligence official said in May that Baghdadi was still alive, and likely to be in Syrian territory along the Iraqi border.

SDF officials have said he is not believed to be among the jihadists holed up in Baghouz.

At the SDF search point, the US-backed fighters separated the women from the men, who stood in a queue waiting to be searched.

Female SDF fighters nearby patted down the female evacuees, most of whom were fully veiled, as their children played on the rocky ochre terrain.

"(The SDF) wants to launch a (military) campaign and we are weak," said one woman, when asked why so many were pouring out of the village.

"We women are weak," she added.

Other women said the exodus was because life inside the IS redoubt was unbearable.

"You can't live inside and you can't even get out", said Sabah Mohammad Chehab, a Syrian in her twenties.

Originally from the northern city of Aleppo, she said smugglers are charging up to $2,000 (1,760 euros) to get people out shrinking patch.

"We are happy to have made it out," she said.