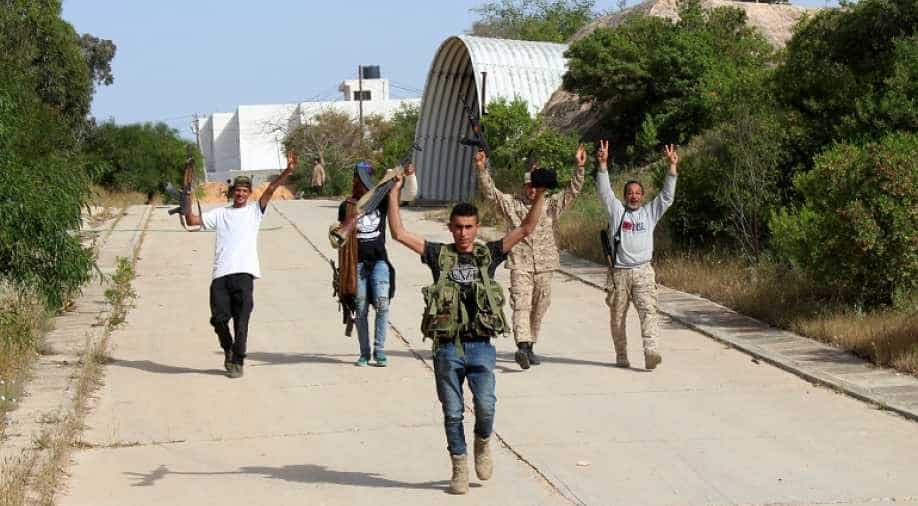 "We have launched a new phase of attack. Orders were given early this morning to advance and gain ground," said Mustafa al-Mejii, a spokesman for the Government of National Accord's (GNA's) forces.

"We have launched a new phase of attack. Orders were given early this morning to advance and gain ground," said Mustafa al-Mejii, a spokesman for the Government of National Accord's (GNA's) forces.

Haftar launched an offensive on April 4 against the UN-recognised GNA, which is based in Tripoli, resulting in repeated fierce clashes on the southern edges of the capital.

Sustained rocket and shellfire could be heard in several districts of Tripoli on Saturday, after several days of less intense fighting and stalemate on the ground.

Haftar backs a rival administration to the GNA based in eastern Libya that refuses to recognise the authority of the Tripoli government.

The GNA counter-attack came a day after the White House said US President Donald Trump spoke on the phone with Haftar, to discuss "a shared vision for Libya's transition to a stable, democratic political system".

Ahmad Al-Mesmari, a spokesman for Haftar's self-styled Libyan National Army (LNA), said late Saturday: "We have won the political battle and we have convinced the world that the armed forces are fighting terrorism."

He also acknowledged that "very violent" fighting had taken place on multiple fronts on Saturday.

The GNA "has received reinforcements from Al-Qaeda terrorists, Islamic State and foreign mercenaries", according to Mesmari.

But he did not acknowledge the LNA's loss of ground -- in particular Ain Zara, in the southern suburbs of Tripoli.

An AFP team on the ground confirmed pro-GNA forces had advanced in Ain Zara, where the frontline was shifted a few kilometres south.

The Tripoli Protection Force -- a coalition of pro-GNA militias, including fighters from the city of Misrata -- also advanced to Wadi Rabie, another southern suburb, an officer on the ground told AFP.

The advance followed "heavy artillery (attack) and medium-calibre fire early in the morning", he said but did not want to be named.

He said eight of his fighters had been wounded.

Seven air strikes were carried out against military positions held by the LNA, according to the GNA's military spokesman Colonel Mohamad Gnounou.

Gnounou said strikes took place south of Gharian, 100 kilometres (60 miles) southwest of the capital, and against an airbase at Al-Wotya, 50 kilometres further southwest.

Welcoming the gains by his forces on the ground, GNA head Fayez al-Sarraj called in a statement for humanitarian law to be respected.

The LNA, for its part, said its fighters were "taking control of several new positions on the frontlines in Tripoli".

"Our forces are progressing as the GNA militias retreat on all fronts," the LNA said on its Facebook page.

LNA "reinforcements have arrived at the frontlines -- military brigades, army battalions - to (win) the battle as soon as possible", it added.

Haftar's offensive has sharpened fault lines in policy towards Libya among world powers.

On Thursday, Russia and the United States opposed a British bid backed by France and Germany at the UN Security Council to demand a ceasefire in the North African country.

Observers see Trump's subsequently acknowledged contact with the strongman, at the expense of Sarraj, as evidence of US support that explains Haftar's determination to pursue his offensive against Tripoli.
Hundreds of "yellow vest" protesters on Friday demonstrated in Tripoli against Haftar, and also accused France of backing his forces.

Wearing the trademark yellow vests of French anti-government demonstrators, they were among thousands of Libyans who flooded a central Tripoli square to rally in support of the GNA.

The French embassy in Libya on Friday tweeted -- in Arabic -- that Paris was "opposed to the attack" on Tripoli and urged all parties to abide by a ceasefire and engage in peace negotiations.

Libya has been mired in chaos since the NATO-backed uprising that toppled and killed dictator Moamer Kadhafi in 2011.
Alongside the rivalry between the GNA and the LNA, myriad militias have vied for control of key cities, while jihadist activity has also periodically flared.