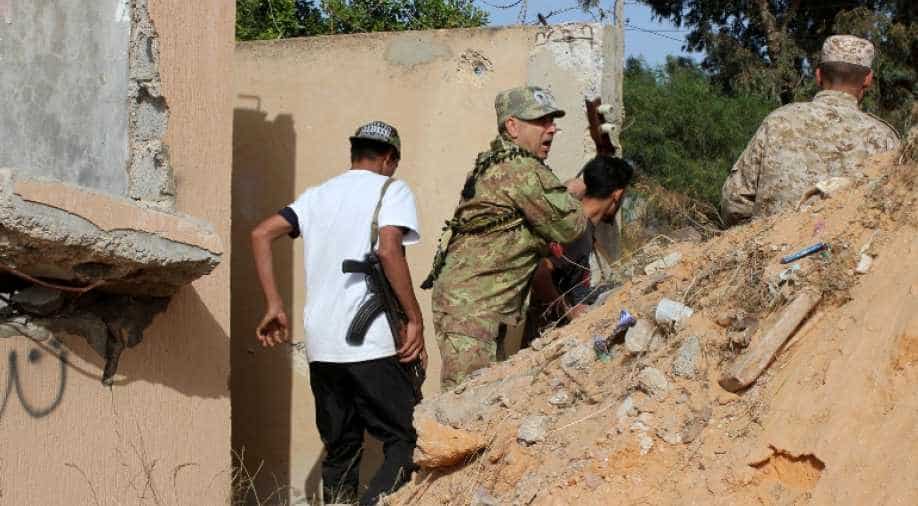 Members of the Libyan internationally recognised government forces look out from behind a wall at Khallat Farjan area in Tripoli. Photograph:( Reuters )

The spike in violence happened after the White House said on Friday that President Donald Trump spoke by phone earlier in the week with Libyan commander Khalifa Haftar, who started an offensive against Tripoli on April 3.

Heavy clashes broke out in the southern districts of the Libyan capital Tripoli on Saturday, with shelling audible in the city centre, residents said, as the death toll from two weeks of fighting between the country's rival governments rose to 220.

The spike in violence happened after the White House said on Friday that President Donald Trump spoke by phone earlier in the week with Libyan commander Khalifa Haftar, who started an offensive against Tripoli on April 3.

The disclosure of the call and a US statement that it "recognized Field Marshal Haftar's significant role in fighting terrorism and securing Libya's oil resources" has boosted the commander's supporters and enraged his opponents.

Western powers and the Gulf have been divided over a push by Haftar's forces to seize Tripoli, undermining calls by the United Nations for a ceasefire.

Despite the offensive, Haftar's Libya National Army (LNA) force has not been able to breach the southern defences of forces allied to the internationally recognized administration based in the city.

On Saturday, shelling was louder and more frequent on Saturday than in previous days and audible even in central districts more than 10 km (6 miles) away from the frontline, residents said.

Both sides claimed progress in southern Tripoli, but no more details were immediately available.

On Friday, two children were killed in shelling in southern Tripoli, residents said. The fighting has killed 220 people an wounded 1,066, the World Health Organization (WHO) said.

It was unclear why the White House waited several days to announce Monday's phone call.

On Friday, Acting US Defense Secretary Patrick Shanahan said, "a military solution is not what Libya needs." He said he supported Haftar’s "role in counter-terrorism" and that Washington needed Haftar’s "support in building democratic stability there in the region."

On Thursday, both the United States and Russia said they could not support a UN Security Council resolution calling for a ceasefire in Libya at this time.

Russia objects to the British-drafted resolution blaming Haftar for the latest flare-up in violence when his LNA advanced to the outskirts of Tripoli earlier this month, diplomats said.

The United States did not give a reason for its decision not to support the draft resolution, which would also call on countries with influence over the warring parties to ensure compliance and for unconditional humanitarian aid access in Libya.

The country has been gripped by anarchy since Muammar Gaddafi was toppled in 2011.

While the Tripoli battle continued, municipal elections took place in seven towns, mainly in the south, the election commission said.

The vote is part of elections for local councils across Libya. Security differs from region to region as the country is controlled by rival governments, tribesmen and armed groups.

In western Libya polls in several communities had been postponed a week ago due to the fighting.