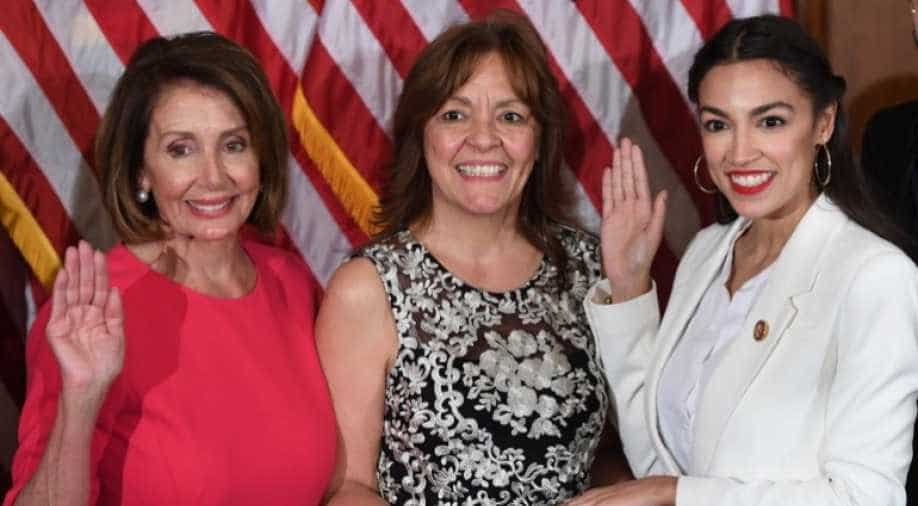 Speaker of the House Nancy Pelosi (L) performs a ceremonial swearing-in for US House Representative Alexandria Ocasio-Cortez (R), at the start of the 116th Congress at the US Capitol in Washington, DC. Photograph:( AFP )

'People are going to have to pay their fair share of taxes,' Alexandria Ocasio-Cortez told CBS television's '60 Minutes' on Sunday.

Alexandria Ocasio-Cortez began her term as the youngest woman ever elected to the US Congress with a bang this week by proposing to tax the ultra-rich at 60 or 70 per cent.

The daughter of hardscrabble working-class parents, the 29-year-old New Yorker was working toward making good on a campaign promise.

"People are going to have to pay their fair share of taxes," she told CBS television's "60 Minutes" on Sunday.

The proposal is part of an ambitious tax plan dubbed the "Green New Deal" that aims to eliminate carbon emissions by 2030.

The self-described Democratic Socialist, nicknamed AOC, suggested taxing the ultra-wealthy up to 70 per cent in order to finance the plan.

"You look at our tax rates back in the 60s and when you have a progressive tax rate system, your tax rate, let's say, from zero to $75,000 maybe 10 per cent or 15 per cent, et cetera," Ocasio-Cortez explained.

"But once you get to, like, the tippy tops, on your 10 millionth dollar, sometimes you see tax rates as high as 60 or 70 per cent. That doesn't mean all $10 million are taxed at an extremely high rate. But it means that as you climb up this ladder you should be contributing more."

The top marginal tax rate is now 37 per cent, following President Donald Trump's fiscal reforms. It was previously at 39.6 per cent.

Even though it has little chance of success, the proposal backed by the young lawmaker has already garnered significant support.

It landed her on the front page of the New York Daily News, an image of which Ocasio-Cortez was quick to retweet.

A Washington Post analysis found that if the approximately 16,000 Americans who earn more than $10 million each paid 70 per cent income taxes for any revenue above that marker, the federal government would rake in around $72 billion per year.

But the sum would likely be much lower because individuals falling in that bracket would find ways to avoid the heavy tax burden.

"On the tax issue, she's just saying what good economists say," he added.

Undeterred by her youth

Ocasio-Cortez's surprise victory during Democratic primaries in June over Joseph Crowley has made her a key figure of the liberal wing of the party. Crowley had run unopposed for more than a decade and was seen as a contender to become the next speaker of the House of Representatives.

She rarely attacks President Donald Trump — but when questioned, she told CBS there was "no question" he was a racist.

"The president certainly didn't invent racism. But he's certainly given a voice to it and expanded it and created a platform for those things," she said.

But the 29-year-old is no stranger to criticism — and has repeatedly demonstrated she can respond swiftly to her detractors.

To suggestions her proposals are unrealistic, she told CBS: "We pay more per capita in healthcare and education for lower outcomes than many other nations.

"And so for me, what's unrealistic is what we're living in right now."

And when Republican campaign consultant Ed Rollins called her a "little girl" on a conservative television talk show, Ocasio-Cortez shot back on Twitter: "If anything, this dude is a walking argument to tax misogyny at 100%."

On Friday, a video released online by a detractor showing a young Ocasio-Cortez dancing with fellow Boston University students to the Phoenix song "Lisztomania" in a remake of a mashup of scenes from the Brat Pack movies.

But rather than embarrass Ocasio-Cortez, the release ended up having the opposite of its intended effect.

The congresswoman, who has over two million Twitter followers and 1.5 million on Instagram, responded by posting a new video of her dancing in front of her office on Capitol Hill, writing: "I hear the GOP thinks women dancing are scandalous. Wait till they find out Congresswomen dance too!"

With her past as a New York bartender, Ocasio-Cortez is a figurehead of the new wave of young lawmakers who entered Congress after the midterm elections, bringing fresh perspectives and more diversity to the legislature.

Asked if she considers herself to be a radical, Ocasio-Cortez told CBS, "You know, if that's what radical means, call me a radical."

"I think that it only has ever been radicals that have changed this country," she explained.