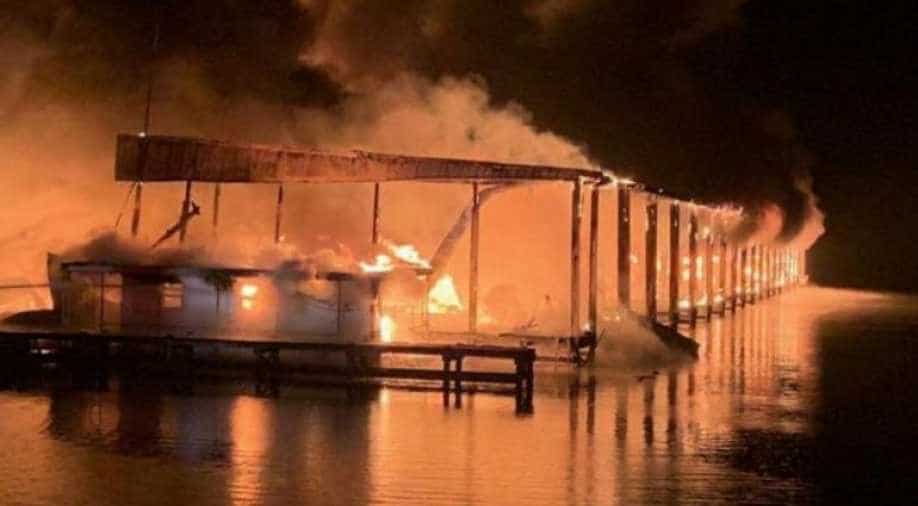 A wooden dock in Scottsboro was engulfed by the blaze in which its aluminium roof collapsed and around 35 boats docked on the Tenessee river sank.

At least 8 people were killed and 7 injured in an enormous fire that engulfed 35 boats in the lakefront marina in Alabama on Monday.

A wooden dock in Scottsboro was engulfed by the blaze in which its aluminium roof collapsed and the boats docked on the Tenessee river sank.

The victims' identities have not yet been released.

''Although all the people known to have been staying at the dock have been accounted for, but emergency responders will continue searching for victims in case anyone was missed,'' according to Scottsboro's fire chief Gene Necklaus.

''Seven people who leapt into the water after the fire started around midnight were rescued and taken to hospital, where they were treated and released,'' Necklaus added.

The cause of the fire has not yet been figured out.

Images shared on showed a row of boats at the marina engulfed in flames in the predawn darkness at Lake Guntersville in northern Alabama.

Smoke was still rising from the remnants of the dock and its roof, even after hours of sunrise.

Officials at first reported eight people missing, and upon further search, all eight were found dead, the fire chief said.

Although they jumped into the water to save their life they had already been burned by the fire that tore the middle portion of their ships.

“Our primary objective is to assess every boat, every vessel to ensure that we have accounted for all the victims,” Necklaus said.

Authorities will continue search and rescue efforts in addition to environmental cleanup before concentrating on determining the cause of the fire, he said.