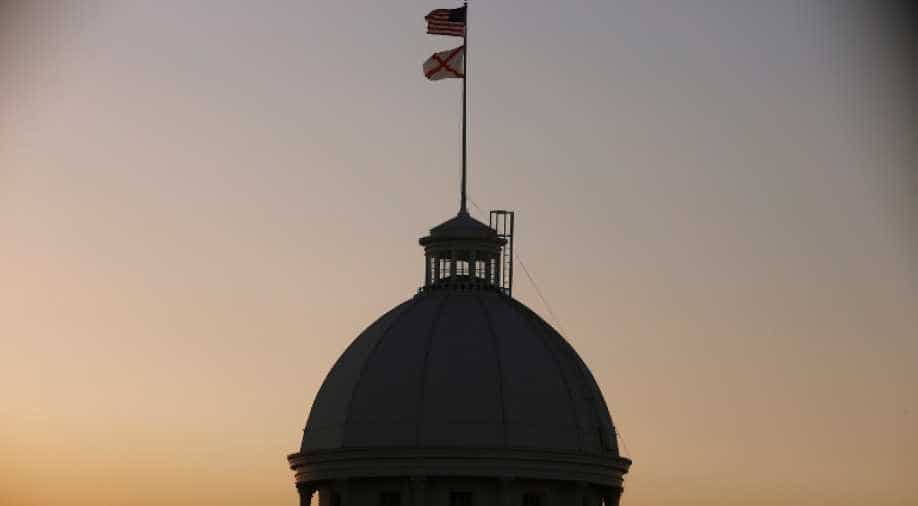 The US Flag and Alabama State Flag fly over the Alabama Governor's Mansion. Photograph:( Reuters )

Alabama's state Senate passed a bill on Tuesday to outlaw nearly all abortions, creating exceptions only to protect the mother's health, as part of a multistate effort to have the US Supreme Court reconsider a woman's constitutional right to an abortion.

Alabama's state Senate passed a bill on Tuesday to outlaw nearly all abortions, creating exceptions only to protect the mother's health, as part of a multistate effort to have the US Supreme Court reconsider a woman's constitutional right to an abortion.

The country's strictest abortion bill was previously approved by the Alabama House of Representatives and will now go to Republican Governor Kay Ivey, who has withheld comment on whether she would sign but is generally a strong opponent of abortion.

The law, which passed 25-6, would take effect six months after being signed by the governor, but is certain to face legal challenge from the American Civil Liberties Union and other groups which have vowed to sue.

Legislation to restrict abortion rights has been introduced this year in 16 states, four of whose governors have signed bills banning abortion if an embryonic heartbeat can be detected.

The Alabama bill goes further, banning abortions at any time. Those performing abortions would be committing a felony, punishable by 10 to 99 years in prison, although a woman who receives an abortion would not be held criminally liable.

The Republican-controlled Alabama Senate also defeated a Democratic amendment that would have allowed legal abortions for women and girls impregnated by rape and incest.

Anti-abortion advocates know any laws they pass are certain to be challenged, and courts this year have blocked a restrictive Kentucky law and another in Iowa passed last year.

But supporters of the Alabama ban said the right to life of the unborn child transcends other rights, an idea they would like tested.

Republican Senator Clyde Chambliss, arguing in favor of the Alabama bill, said the whole point was "so that we can go directly to the Supreme Court to challenge Roe versus Wade."

The high court, now with a majority of conservative justices after Republican President Donald Trump appointed two, could possibly overturn Roe v. Wade, the 1973 landmark decision establishing a woman's right to an abortion.

Just this year, Georgia, Kentucky, Mississippi and Ohio have outlawed abortion after a doctor can detect an embryonic heartbeat.

Opponents call the "heartbeat" legislation a virtual ban because embryonic cardiac activity can be detected as early as six weeks, before a woman may be aware she is pregnant.

Democratic state Senator Linda Coleman-Madison called the Republicans hypocritical for advocating small government that ought to stay out of private matters but "now you want in my womb; I want you out."

All 27 Republican senators are men.

The group Physicians for Reproductive Health said the near total ban on abortions would have a disastrous effect on healthcare.

"Physicians will be unwilling to help patients in need, even when continuing pregnancy is detrimental to a patient's health, or potentially fatal, out of fear of being scrutinized by the criminal justice system," Dr. Yashica Robinson, a board member and ob/gyn, said in a statement.

The National Organization for Women (NOW) denounced the ban as unconstitutional.

"This is a transparent effort to drum up political support for anti-abortion candidates in upcoming elections and serves as a direct threat to women's health, autonomy and pursuit of happiness," NOW said in a statement.

Actress and activist Alyssa Milano has called for a sex strike under the social media hashtag #SexStrike in response to the campaigns against abortion rights, urging women to refuse sex with men "until we get bodily autonomy back."