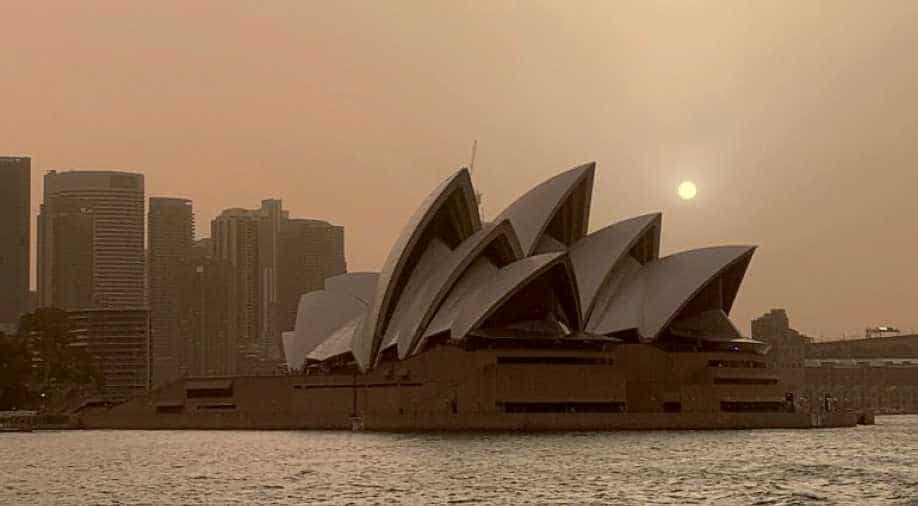 The moon rises over the Sydney Opera House as smoke from bushfires shrouds the skyline in Sydney, Australia. Photograph:( Reuters )

More 100 fires remain ablaze in the region, and authorities warned conditions would worsen on Tuesday when temperatures were predicted to top 40 degrees Celsius (104 Fahrenheit).

Thousands of firefighters were fortifying containment lines on Monday as temperatures were forecast to soar, increasing the danger of a fresh wave of bushfires across Australia's east coast.

More 100 fires remain ablaze in the region, and authorities warned conditions would worsen on Tuesday when temperatures were predicted to top 40 degrees Celsius (104 Fahrenheit).

"Firefighters are trying to take advantage of the more moderate conditions... and establish as many significant containment options as they can," Fitzsimmons told reporters in Sydney. "It is an enormous amount of work with more than 2,000 people out in the field."

Wildfires have killed at least four people, destroyed more than 680 homes and burned more than 2.5 million acres (1 million hectares) of bushland across eastern Australia since the start of November.

Such fires are common in Australia's hot, dry summers, but the ferocity and early arrival of the fires in the southern spring this year have caught many by surprise. Experts have said climate change has left bushland tinder-dry.

In the small city of Hawkesbury, about 50 km (31.1 miles) north-west of Sydney, residents joined firefighters to safeguard their properties.

Mayor Barry Calvert said residents were trying to clear foliage from around their homes, and opening gates to ensure emergency workers have access.

Calvert said many locals were struggling to move animals and livestock in an area renowned for breeding racehorses.

"We've opened the showground for people to move their animals, but many people here may have 20 horses and only two horse boxes so they can't move them quickly," Calvert told Reuters.

The wildfires have blanketed Sydney - home to more the 5 million people - in smoke and ash for more than a week, turning the daytime sky orange, obscuring visibility and prompting commuters to wear breathing masks.