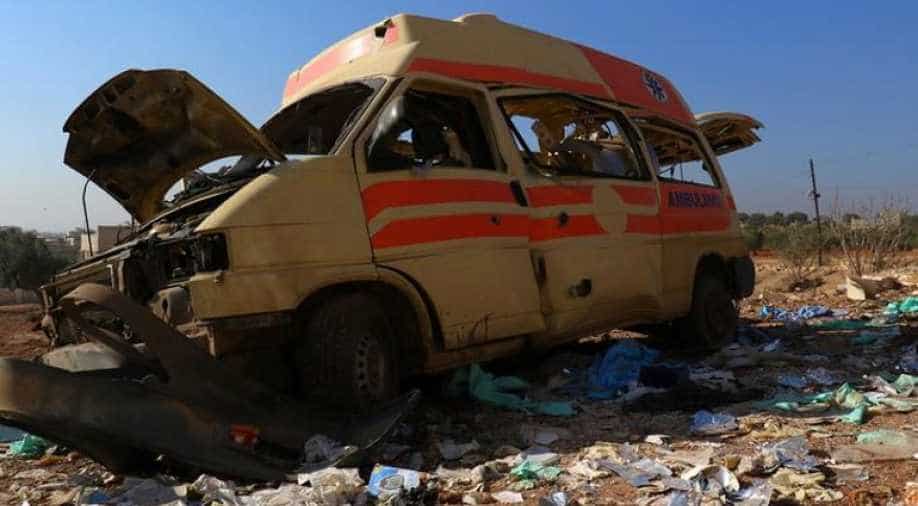 State-owned Ikhabariyah television reported large troop deployments along several main fronts in the Aleppo theatre in preparation for a major ground offensive that it said was imminent and awaiting 'zero hour' to begin. Photograph:( Reuters )

Intense air strikes resumed in rebel-held districts of eastern Aleppo after a weeks-long pause on Tuesday, killing at least three people, according to residents and a war monitor.

Syrian state television said the Damascus government's air force took part in strikes against "terrorist strongholds" in Aleppo's Old City while Russia said it had struck Islamic State and former Nusra Front sites elsewhere in Syria, without mentioning Aleppo. The bombardment appeared to mark the end of a pause in strikes on targets inside the city declared by Syria's government and Russia on October 18.

"Our houses are shaking from the pressure. Planes are soaring above us and the bombardment is around us," said Modar Shekho, a resident of eastern Aleppo. Both rocket strikes by jets and barrel bombs dropped by helicopters were used, residents and a war monitor said. State-owned Ikhabariyah television reported large troop deployments along several main fronts in the Aleppo theatre in preparation for a major ground offensive that it said was imminent and awaiting "zero hour" to begin.

The renewed violence in Aleppo will be closely followed in Washington where President-elect Donald Trump has signalled he intends to take a different approach to Syria from that of President Barack Obama, who has backed some rebel groups. Trump and Russian President Vladimir Putin, whose approach in Syria has been praised by the US president-elect, spoke by phone on Monday and agreed to "combine efforts to tackle international terrorism and extremism", the Kremlin said.

Damascus describes all the rebels fighting to oust Assad, which include both nationalist groups and jihadist factions banned by Western countries, as terrorists. Islamic State does not operate in rebel-held areas, including eastern Aleppo, but the former Nusra Front, now known as Jabhat Fateh al-Sham, does.

Aleppo has for years been divided into government-held western and rebel-held eastern sectors but the Syrian army and its allies managed to isolate and besiege the insurgent districts during the summer. Its allies include Iran's Revolutionary Guards, Lebanon's Hezbollah and Iraqi Shi'ite militias.

A government offensive to retake eastern districts raged from late September to late October, backed by an intense aerial bombardment that the United Nations said killed hundreds and drew condemnation from Western countries and rights groups. However, after Damascus and Moscow announced their pause in strikes last month, a move they said was to let those who wished to quit besieged areas, rebels launched their own assault that killed dozens of civilians in west Aleppo, according to the UN.

Syria's army and its allies reversed all the gains made by the rebels, who had attacked Aleppo's government-held western fringes from outside the city, and then intensified their bombardment in insurgent-held areas nearby, the Syrian Observatory for Human Rights, a war monitor, said.

On Monday and early Tuesday, air strikes hit hospitals in three towns and villages in rebel-held areas to the west of Aleppo, putting them all out of action. Damascus and Moscow both deny targeting hospitals. Other strikes, including some by suspected Russian cruise missiles, hit Saraqeb in Idlib, a province near Aleppo where many of the rebel factions have a large presence.

Russian Defence Minister Sergei Shoigu said on Tuesday Russia had launched attacks in Idlib and Homs provinces using missiles and jets from the country's only aircraft carrier, which recently arrived in the eastern Mediterranean.

"We carried out exhaustive advance research on all targets," said Shoigu. "We are talking about warehouses with ammunition, terrorist training centres...and factories," said Shoigu, adding that the strikes would continue. Rebels and residents in eastern Aleppo have said for more than a week that they expected a resumption in air strikes and a new assault by the army and its allies after the aircraft carrier arrived near Syria and Moscow said the pause would end.

The Observatory and the Civil Defence rescue organisation both reported that three people had been killed and others wounded in the air strikes. "It's all air strikes and parachute bombs. Today, the bombing is violent...There hasn't been this kind of attack in more than 15 days," said Abu al-Laith in Aleppo.