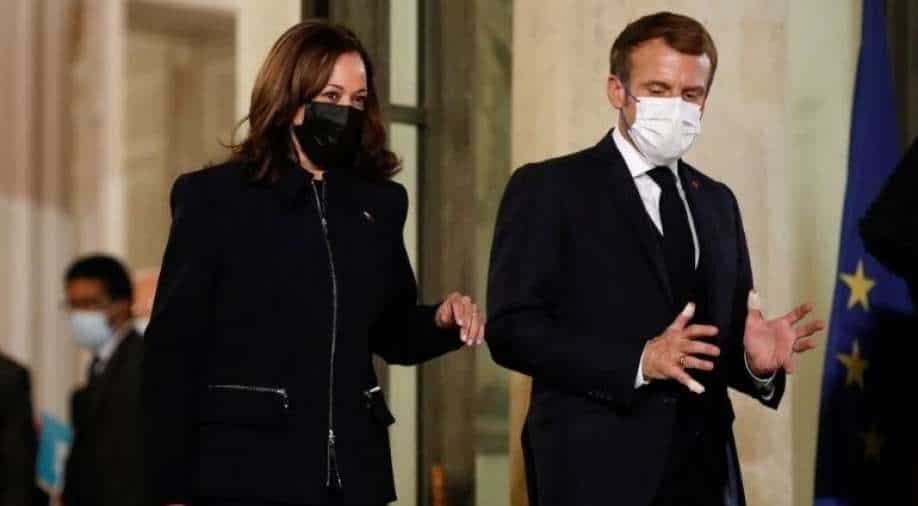 US Vice President Kamala Harris, accompanied by French President Emmanuel Macron, leaves after their meeting at the Elysee Palace, in Paris, France on Wednesday. Photograph:( Reuters )

US Vice President Kamala Harris and French President Emmanuel Macron said they look forward to closer US-French cooperation. The leaders held a bilateral meeting at the Elysée Palace on Wednesday. The meeting was aimed at revitalising US-French ties after the submarine controversy

In a bilateral meeting at the Elysée Palace on Wednesday, US Vice President Kamala Harris and French President Emmanuel Macron said they look forward to closer US-French cooperation.

The meeting was aimed at revitalising US-French ties after the submarine controversy. Now, both the countries are making concerted efforts to rebuild trust.

While thanking Harris for coming to Paris, Macron said he was "extremely grateful" for her presence and that "the French people are extremely proud to have you." The president also noted that on the sidelines of the G20, he had a "very fruitful meeting" with US President Joe Biden in Rome last month.

"We do share the view that we are at the beginning of a new era and our cooperation is absolutely critical for this one," French president said.

On the other hand, Harris also thanked Macron for inviting her to Paris. The US vice president said that "when the United States and France have worked together on challenges and opportunities, we have always found great success."

The US leader also spoke of the world entering a "new era" and said she looked forward to discussing areas of cooperation with France, which include scientific research, space, cyberspace and climate change and vowed to "continue to work together and renew the focus that we have always had on our partnership."