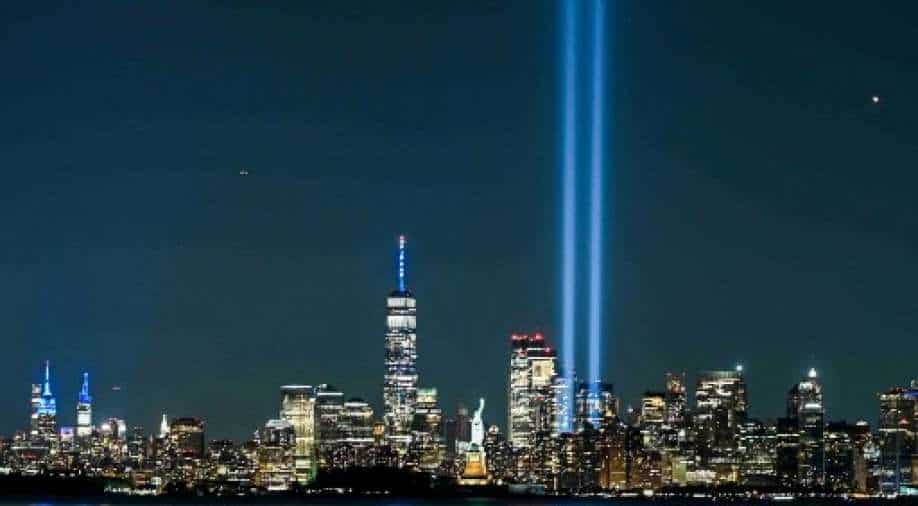 Statue of Liberty shines on September 11 near the "Tribute in Light" in New York Photograph:( AFP )

The FBI report was released after families of the victims demanded the declassified report as the US marked the 20th anniversary of the 9/11 attacks.

On the 20th anniversary of the attacks on New York and Washington by Al Qaeda, the FBI on Saturday released newly declassified documents on investigations related to the 9/11 attacks and the possible role of Saudi Arabia.

The April 4, 2016 report was heavily redacted as it detailed how hijackers received logistical support ahead of the 9/11 attacks.

The families of the victims had demanded the report having the sued Saudi Arabia for alleged complicity in the attacks suspecting the role of Saudi officials in the attack.

The memo put down details of contacts between Bayoumi and the two hijackers - Nawaf al Hazmi and Khalid al Midhar.

The identity of the source behind the interviews was categorised as classified by the US government. The documents wasn't released by earlier US administrations. Biden had asked the Justice Department and other agencies to conduct a declassification review in order to release the report.

According to the report, "Bayoumi's assistance to Hamzi and Midha included translation, travel, lodging and financing" as FBI's anonymous source said Bayoumi often talked about "jihad."

Also Read: 9/11 attacks and a money trail: How terrorists planned the devastating attacks

Omar al-Bayoumi reportedly helped Nawaf al Hazmi and Khalid al Midhar find an apartment in San Diego. The document however did not put down a clear link between the Saudi government and the hijackers.

The victim's lawyer Jim Kreindler however blamed the Saudi government, saying: "The findings and conclusions in this FBI investigation validate the arguments we have made in the litigation regarding the Saudi government’s responsibility for the 9/11 attacks."

The FBI memo reported that telephone numbers associated with the anonymous source indicated contact with a number of people who assisted Hamzi and Midhar in California. Bayoumi and Thumairy also reportedly provided help to Hamzi and Midhar.

Fahad al Thumairy was reportedly an imam at the King Faad mosque in Los Angeles and allegedly an official at the Saudi consulate. The FBI in its report said the source informed that Bayoumi apart from being a student had "very high status" in the Saudi consulate.