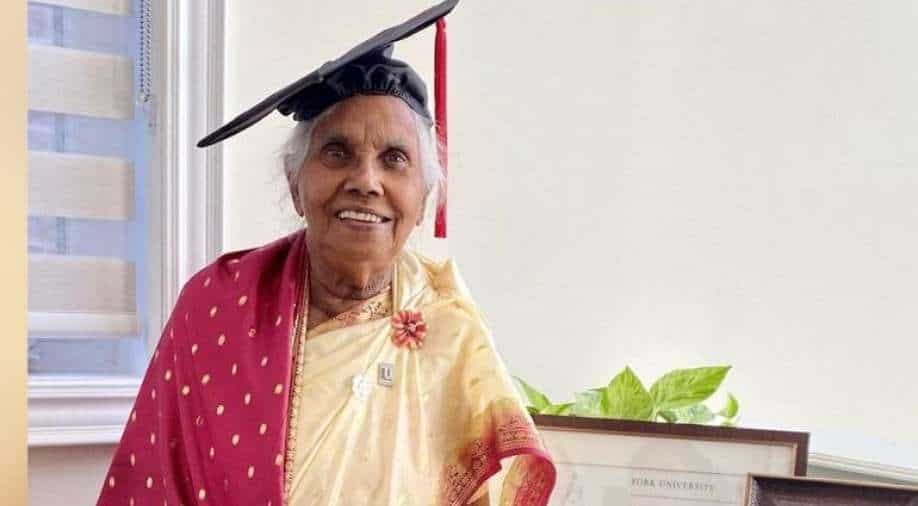 A grandmother of seven from Sri Lanka has become the oldest individual to receive a master's degree from York University in Canada.

Varatha Shanmuganathan, 87, earned a master's degree in political science from the institution, according to a CNN story.

"It has been interesting. On the first of November, I was just an ordinary lady going about my ordinary life. On the second of November, when I graduated, everything changed, " Shanmuganathan told CNN.

Varatha Shanmuganathan, the oldest person to graduate with a master's degree from @yorkuniversity, advises future generations of students to be global thinkers https://t.co/B4IeCrg3fU #YorkUConvo @YorkUAlumni pic.twitter.com/I2beP5R6Hh

Furthermore, Shanmugunathan stated that studying politics and earning a higher degree in it has always been a longtime desire of her.

Shanmuganathan described herself as a history student in an interview with CBC Radio's Metro Morning.

She stated that local and international politics have always piqued her attention.

She pondered pursuing a PhD in political science, but realised that if she began, it would "go on and on" and she may not complete it.

Shanmuganathan was born in the Sri Lankan town of Velanai, according to York Media Relations.

She graduated from the University of Madras in India with a bachelor's degree.

She returned to Sri Lanka and became an Indian history and English teacher.

She then received a teaching certificate from the University of Ceylon.

When she was in her 50s, she obtained her first master's degree from the University of London.

Her daughter, who holds an MBA from York's Schulich School of Business, sponsored her to relocate to Canada in 2004.

Shanmuganathan got admitted to York University for the fall and winter semesters of 2019.