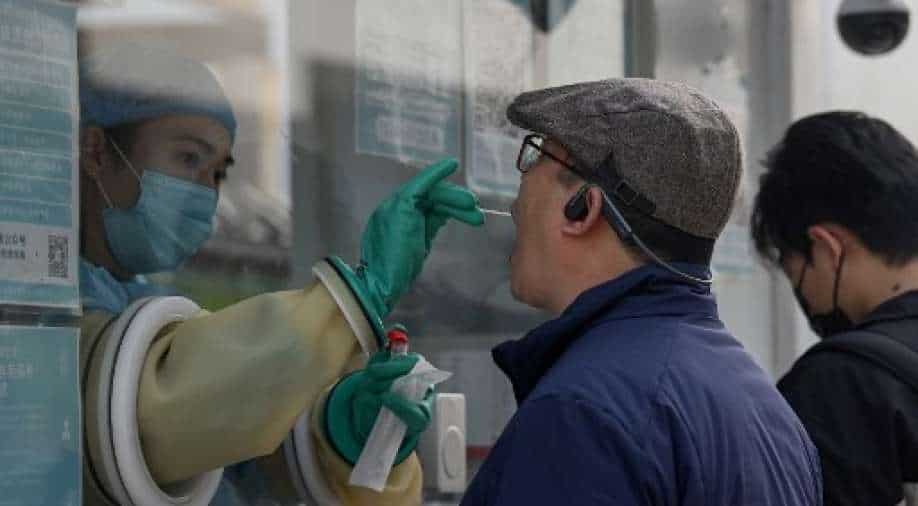 (File photo) A health worker taking a swab sample from a man in Beijing Photograph:( AFP )

Hundreds of flights have been cancelled, schools are shut in Shanghai following the detection of new Covid cases

Six COVID-19 cases were reported from three cities in China in a day, triggering fresh concerns of another coronavirus outbreak.

The new cases have caused alarm as China’s strict zero-Covid policy had so far kept the highly-mutating virus at bay for a brief period of time.

In Shanghai, three women tested positive on Thursday morning, according to the local government.

The three of them travelled together to the neighbouring Suzhou city last weekend, where they dined with two men from Hangzhou in Zhejiang province, the South China Morning Post reported.

The two men, who were classified as close contacts, also tested positive on Thursday evening.

Another close contact, who lives in Xuzhou, Jiangsu province, was notified by the Shanghai authorities and also tested positive.

The six cases come after an outbreak of the highly transmissible Delta variant emerged in mid-October and infected more than 1,300 people in 21 provinces before being contained.

Meanwhile, hundreds of flights were cancelled, schools were shut in Shanghai following the detection of new Covid cases.

Over 500 flights from Shanghai’s two major airports were cancelled on Friday, the Guardian report stated quoting a data from flight tracker VariFlight.

The Shanghai government also instructed that all cross-provincial package tours involving the city - a major commercial and tourism hub - would be cancelled.

All schools were closed in the small satellite city of Xuzhou, which also stopped its two million residents from heading out of the city on bus services, after a close contact of one Shanghai patient was found there

As China prepares itself for the February’s Winter Olympics, where a large number of foreign athletes, media and officials are expected to arrive, Beijing authorities on high alert for any potential outbreaks.