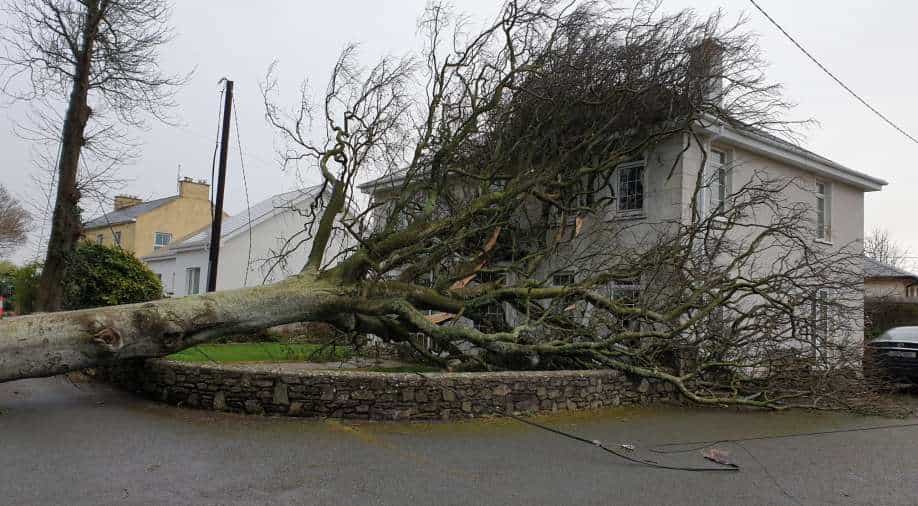 Storm Eunice has led to massive damage in the UK. Weather forecasters have predicted that gusts of up to 80mph are set to hit the UK again on Sunday

In a scary incident, a 400-year-old oak tree was uprooted due to storm Eunice and came crashing down on a family home worth £750,000. The house was located in Brentwood, Essex.

Sven Good, in a report by BBC, explained that he was working in his parents' detached when he "heard a creak and then a massive bang". A few minutes after this, the tree came crashing down and hit several rooms, causing damage to the house.

He explained that the ancient oak had shown no signs of instability before.

Mr Good said, the family "did the very British thing and went to the pub".

"I was on a conference call when I heard a huge breath of wind, a creak, and then a massive bang," he said. Explaining the situation, he said that the whole house shook.

Also read | Storm Eunice: Gusts of up to 80mph are set to hit the UK, yellow warning issued

The tree has taken part of the roof and badly damaged several rooms on the first and ground floors.

Storm Eunice has led to massive damage in the UK. Weather forecasters have predicted that gusts of up to 80mph are set to hit the UK again on Sunday.

The storm, which has brought in extreme weather conditions in the country, has also knocked 1.4 million households off the grid with emergency crews Saturday battling to restore power.

Met Office forecaster Simon Partridge, while speaking to the Guardian said that we can expect “wet and windy weather” to continue into next week. This will also impact the recovery.

He said, “Eunice is gone, but unfortunately things are not settling down. There is another area of low pressure up near Iceland, and that will bring very strong winds again through Sunday. As well as that we’ve got reasonably heavy rain as well."

Storm Eunice sparked the first-ever "red" weather warning for London on Friday. It was one of the most powerful tempests in Europe since the "Great Storm" hit Britain and northern France in 1987.