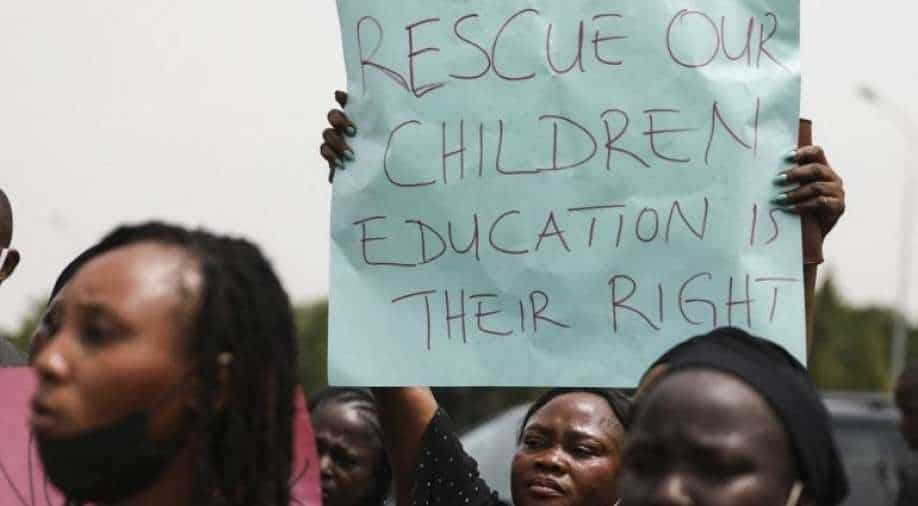 File photo: Parents and relatives of students from the Federal College of Forestry Mechanization in Kaduna who have been abducted, hold placards during a demonstration in Abuja on May 4, 2021 to demand the release of their families who has spent 55 days in captivity. Photograph:(AFP)
Follow Us

One person was killed and some others injured when unknown gunmen abducted about 150 children of an Islamic school in Nigeria's Niger state.

The Salihu Tanko Islamic School is located at Tegina in the Rafi Local Government Area of the north-central Nigerian state of Niger.

According to sources, the kidnapping was carried out at 4:30 pm (local time) on Sunday.

Security teams have been mobilised to rescue the schoolkids and the police will "ensure the children are rescued unhurt", he said.

Armed bandit groups have been behind a spate of kidnappings for ransom raids on colleges and educational institutions in northern Nigeria in recent months, abducting over 700 young people since December.

According to human rights groups, Nigerian security authorities have failed to create a strategy to protect its school children and college students and their access to study even after the seven years of the most infamous 'Chibok schoolgirls kidnapping', when the 279 girls from a government school in northern Nigeria were abducted by the Boko Haram terrorists.

Also read: Kidnappers release all 279 Nigerian students after talks with the government

On April 14, 2014, the militant group Boko Haram kidnapped the 279 schoolgirls in Chibok, a town in Borno state. Most of them were able to flee or were eventually released.

In recent years in Nigeria, criminal bandit groups seeking a huge amount of ransom have increased their assault and mass abductions, frequently targeting boarding schools outside of towns and cities.