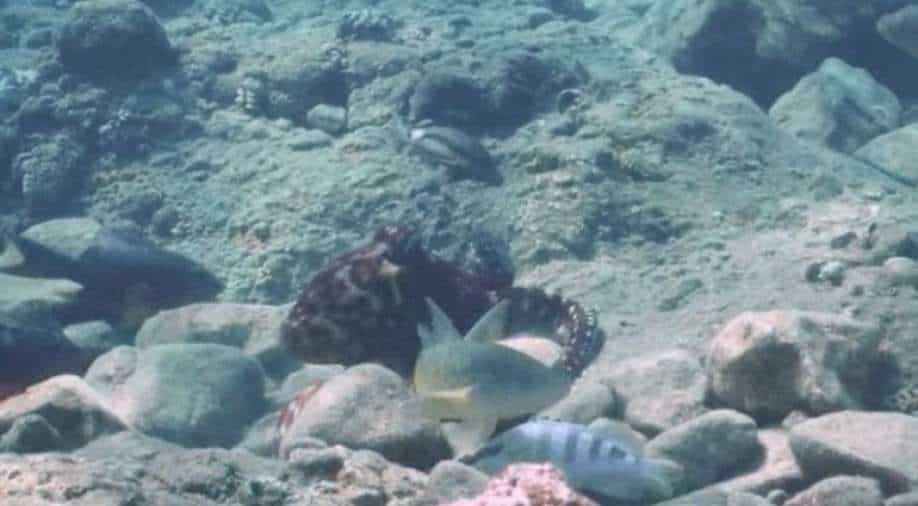 As per the study, throwing, in general, is more often seen by females, and we have seen only one hit from a throw by a male.

Researchers at the University of Sydney have studied a set of patterns and behaviour of octopuses at an Australian site that revealed "targeted throwing" based on social effects in interactions between individuals.

The researchers have observed that throwing of material (shells, silt and other debris) by wild octopuses is common in the particular site, especially female octopuses, who intentionally throw shells and silt at other octopuses, often males making "mating attempts".

Previously, octopuses have displayed the behaviour of spitting and throwing debris at each other in what could be an intentional use of weapons. However, the recent observation sheds light on the social factors behind such "targeted throwing".

The preprint and the non-peer-reviewed article has been posted on bioRxiv and is based on the recording of octopuses in Jervis Bay on the south coast of New South Wales since 2015.

"Wild octopuses at an Australian site frequently propel shells, silt, and algae through the water by releasing these materials from their arms while creating a forceful jet from the siphon held under the arm web," abstract of the study read.

The study further mentioned that a "conspicuous" behaviour observed in the video data involved the coordinated use of arms, web and siphon, by which material was projected through the water column.

As per the study, throwing, in general, is more often seen by females, and we have seen only one hit from a throw by a male. Octopuses who were hit included other females in nearby dens and males who have been attempting mating with a female thrower.

A total of 15 out of 17 recorded hits were made by female octopuses, known as hens, according to the study, the majority from two specific octopuses.

"It's hard to know how best to describe it," Peter Godfrey-Smith told New Scientist.

"That sequence was one of the ones that convinced me [it was intentional]," Godfrey-Smith, author of Other Minds: The Octopus, the Sea, and the Deep Origins of Consciousness, told New Scientist.

As per the study, once In one case, a male octopus threw a shell in a random direction when a female rejected his advances, Godfrey-Smith said, perhaps he vented his frustration.

Of the 13 where the sex could be determined five of their victims were male and eight were female.